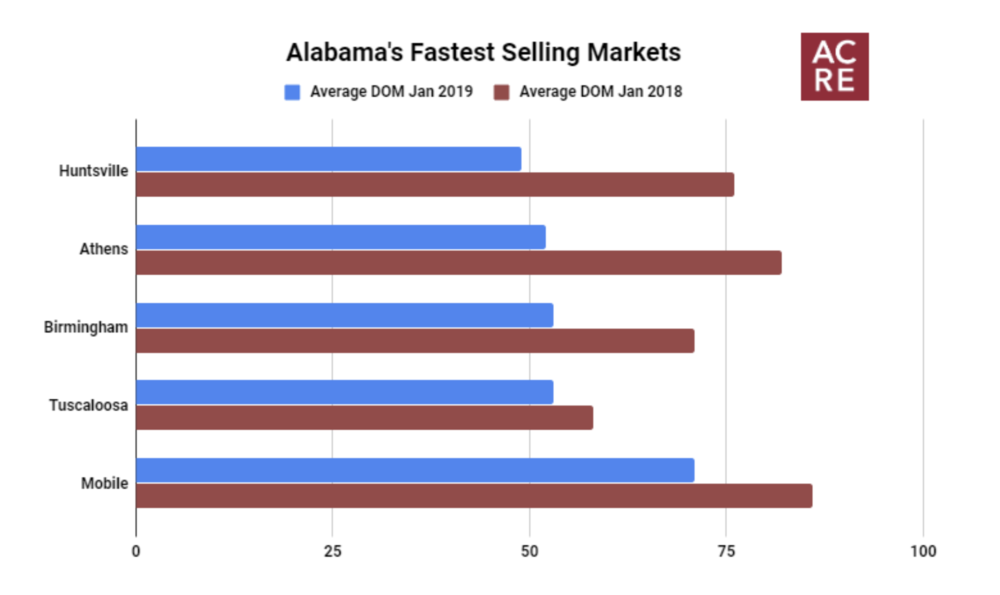 The Alabama Center for Real Estate created the following rankings based on average days on market (DOM) for closed transactions during January.

Huntsville- With a days on market (DOM) average of 49 days, Huntsville was Alabama’s fastest selling market during January. The area has now seen eight consecutive months with a DOM average of below 60 days. Huntsville was Alabama’s second fastest selling market in 2018 with an annual DOM average of 57 days, second to Birmingham with 52. Going forward, expect properties in the area to continue to sell at a fast pace as tightening inventory trends from 2018 continued into January. Listings in the area declined 28.3 percent year-over-year (YoY) from 1,823 in January 2018 to 1,308 currently. It is possible, however, that an increase in finished lot inventory in the Huntsville area will provide some inventory relief as this creates an opportunity for the already strong new construction market to expand to new heights.

Athens- Driven in part by a strong new construction market, Athens was Alabama’s second fastest selling market in January with a DOM average of 52 days. New construction listings in the area spent an average of 31 days on the market and accounted for 46.7 percent of all residential transactions. Resales, on the other hand, saw a DOM average of 71 days during January. With new construction accounting for 36 percent of all residential sales in the area during 2018, Athens, along with the greater Huntsville area are both poised for continued growth as the regional economy continues to attract technology and manufacturing companies. Additionally, the outlook for 2019 and beyond is strong as the $1.6 billion Mazda Toyota facility broke ground in late 2018, with automobile production beginning in 2021.

Birmingham- Although it was Alabama’s third fastest selling market in December with a DOM average of 53 days, Birmingham was Alabama’s fastest selling market during 2018 with an annual DOM average of 52 days, an improvement of 11 days or 16.6 percent from 2017. Demand for housing remained strong as January sales increased 6.1 percent YoY. The surprise for Birmingham’s residential market, however, was the 11.8 percent gain in homes listed for sale. January’s inventory gain broke a 22-month streak of YoY inventory losses going back to February 2017. The inventory gain did provide some relief for buyers as January’s median sales price increased 3.2 percent, moderating somewhat from the annual average of 5.2 percent in 2018. The Birmingham area joined Daphne-Fairhope-Foley, Auburn-Opelika, and Tuscaloosa as the only four of Alabama’s 12 metro areas with inventory gains in January.

Tuscaloosa- With a DOM average of 53 days, the Tuscaloosa area tied for Alabama’s third fastest selling market in January. Demand for housing in the area remained strong as total residential sales improved 12.1 percent from 124 closed transactions in January 2018 to 139 currently. Similar to Birmingham, the Tuscaloosa area went against statewide inventory trends with a 1.8 percent gain YoY in residential listings. The slight inventory gain did provide some relief in home price appreciation as the median sales price climbed 2.5 percent from $175,500 to $179,900, moderating somewhat from the annual average of 5.7 percent in 2018.

Mobile- Residential properties selling in January averaged 71 days on the market, making the Mobile area Alabama’s fifth fastest selling market in the first month of 2018. Residential sales in the area declined 4.1 percent from 243 closed transactions in January 2018 to 233 currently. The area’s median sales price also declined 2 percent from $148,000 to $145,000. However, average days on market improved by 15 days from one year ago. Mirroring statewide trends, residential properties for sale during January declined 11.9 percent from one year ago. The Mobile area currently has a balanced market with 6.0 months of supply. Even though residential sales activity slowed somewhat in January, the region has a bright outlook for 2019 and beyond as the Port of Mobile continues to diversify its operations to accommodate the state’s changing economy.