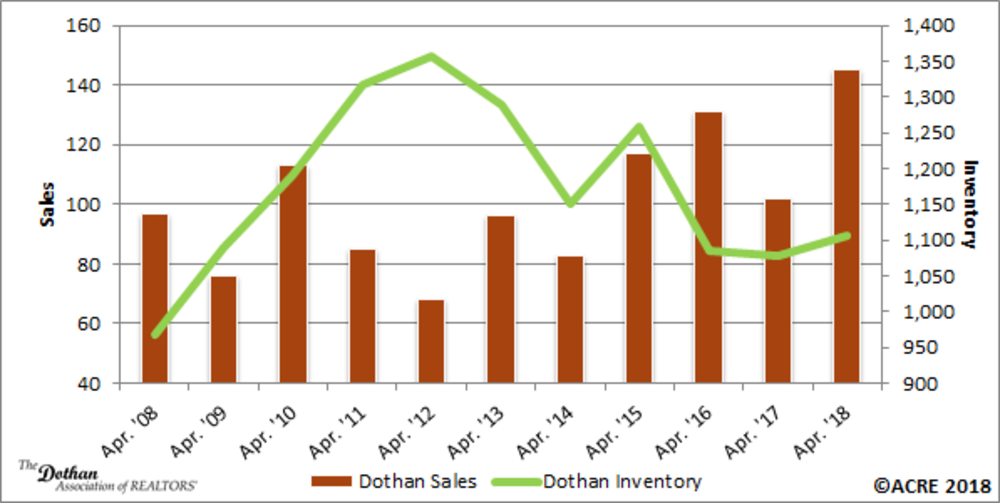 While most markets across the state saw year-over-year inventory declines in April, inventory in the Dothan area is growing

Residential Sales and Inventory Grow During April in the Dothan Area

Sales: According to the Dothan Multiple Listing Service Inc., Dothan-area residential sales totaled 145 units during April, an increase of 42.2 percent from one year ago when sales totaled 102 units. More resources for the Dothan Area: Monthly Report, Quarterly Report, and Annual Report.

Forecast: Closed transactions in April were 22.9 percent above the Alabama Center for Real Estate’s (ACRE) monthly forecast. ACRE’s 2018 sales forecast through April projected 436 closed transactions, while the actual sales were 449 units, a favorable difference of 2.98 percent.

Supply: The Dothan-area housing inventory in April was 1,107 units, an increase of 2.8 percent from April 2017. April inventory was 2 percent above March. Historical data indicate that April inventory on average (2013-17) increases from March by 0.4 percent. There were 7.6 months of housing supply during April (approximately 6 months represents a balanced market during April) versus 10.6 months of supply one year ago, a decrease of 27.7 percent.

Pricing: The Dothan-area median sales price during April was $139,900, a 0.2 percent decrease from April 2017 and a 7 percent decrease from the prior month. This direction is inconsistent with historical data trends from 2013-2017 indicating that median price increases 17.8 percent from March. Differing sample sizes (number of residential sales of comparative months) can contribute to statistical volatility, including pricing. ACRE highly recommends consulting with a local real estate professional to discuss pricing trends, as they will vary from neighborhood to neighborhood.

The Dothan Residential Monthly Report was developed in conjunction with the Dothan Association of Realtors to better serve area consumers. 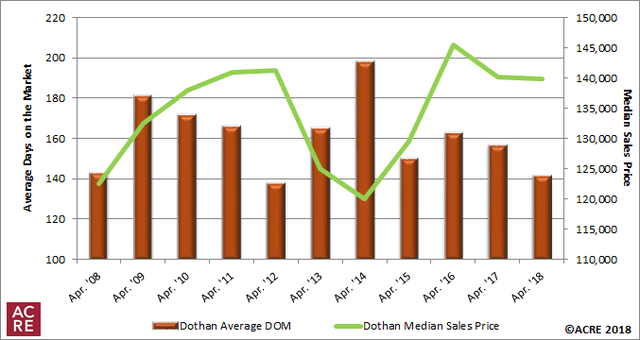