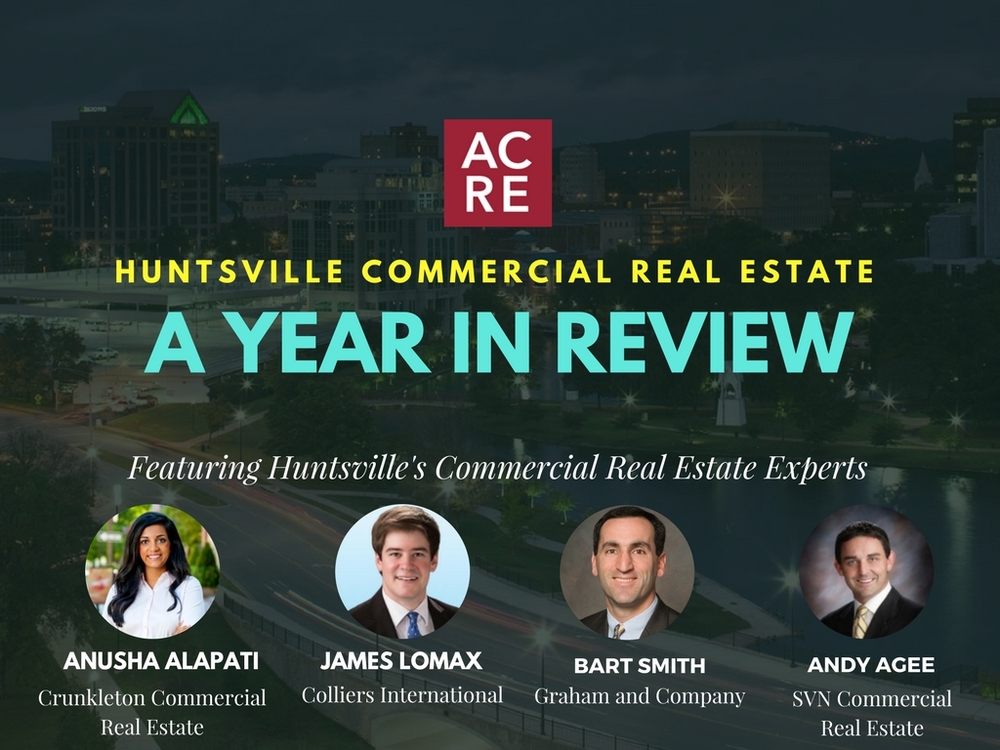 The 2017 retail market for Huntsville remained strong despite concern for the retail market nationally. The overall vacancy rate decreased from 5.2 percent to 4.6 percent in 2017. Asking rates increased with new space on the market, an estimated 120,000 square feet of new construction was under development in 3Q17. With Huntsville being the fastest growing city in Alabama, many new retailers are still looking to enter the market and take advantage of the opportunities that growth offers.

Mixed-use and adaptive-reuse developments are the trend in Huntsville, as they are throughout the nation, with several of these type projects currently underway. Several properties are being repurposed for multiple uses, specifically in the downtown area.  To combat the struggle of big-box retail, developers are focused on creating a one-of- a-kind experience. Huntsville’s strong retail market is proof that brick-and-mortar is not going away, but is simply changing to meet the market.  Retail is changing from big-box style stores to smaller stores with a higher emphasis on creating an experience for the customer.

Nationally, strong Black Friday sales were a positive sign for brick-and-mortar locations and indicate the need for a physical location. According to International Council of Shopping Centers (ICSC), retailers with a brick-and-mortar presence captured approximately 75 percent of all sales over Thanksgiving weekend.

Within the office sector, 2017 showed stark improvement over the previous year. While momentum was surging with a higher volume of lease deals in 2016, 2017 has shown much larger tenants in the Huntsville market, including some major relocations with more coming soon.

Politics aside, the consensus among the office community has been that the election of President Donald Trump in 2016 has been a boom for the defense industry as expectations are high and contracts are expected to continue to flow to fund many of the business sectors related to defense that thrive in the Huntsville metro area.

That encouragement has led to excitement in 2017 and more defense industry related players have been less hesitant than they were in the past to consider expansions and relocations to higher class facilities, and it has shown within the statistics.

While rents are rising and vacancy is declining, appetite for office development, while enticing, is still not as rampant in Huntsville as in other markets. However, anecdotal evidence indicates that more activity is prevalent, the size of the activity is larger and the momentum of 2017 should carry into a strong 2018.

Vacancy for Huntsville’s industrial market continued to decline in 2017 and marks the 7th consecutive year of decreased availability. The overall vacancy rate now stands at 6.40% compared to 6.86% in 2016. The largest block of space available is the 660,000 former Navistar plan in the Jetplex Market.

The Huntsville market experienced positive absorption again in 2017 for the 5th year in a row. Over 2.3 million square feet  have been absorbed in the market since 2012. Activity was strong across all three markets and is predicted to remain healthy in 2018. The overall vacancy rate per area is as follows:

Industrial building supply is not keeping pace with the healthy demand from supply-chain and distribution users, creating rent increases across most of the nation. Rents for industrial space have begun to increase locally and are forecasted to increase again in 2018.

Three announcements in 2017 will have a positive impact on Huntsville’s industrial market for many years in the future:

In 2017 the Huntsville, Alabama apartment market enjoyed strong fundamentals, as multifamily investors from around the globe made efforts to enter the North Alabama market looking for a reasonable yield in a strong growth market. This feat that has become increasingly challenging in larger markets where sales volume decreased in 2017, as yield shrunk to below many investor’s appetite, particularly the highly leveraged investor.

In 2017, and likely continuing into 2018, smaller second tier and tertiary markets that have sustained job and population growth and offer a positive outlook like Huntsville are seeing opportunistic apartments investors knocking on the door. Unlike larger markets around the U.S., Huntsville offers a safe and somewhat more reasonably priced opportunity.

In 2017, a flood of new buyers put upward pressure on prices and promises to continue to do so over the coming 12-24 months. With new construction slowing in the area (2017 saw the least new deliveries in 5 years), new money rehabilitating older product, rents have increased between 3-3.5% this year. This trend should continue across the board over the coming quarters providing appreciable value to apartment assets in North Alabama.