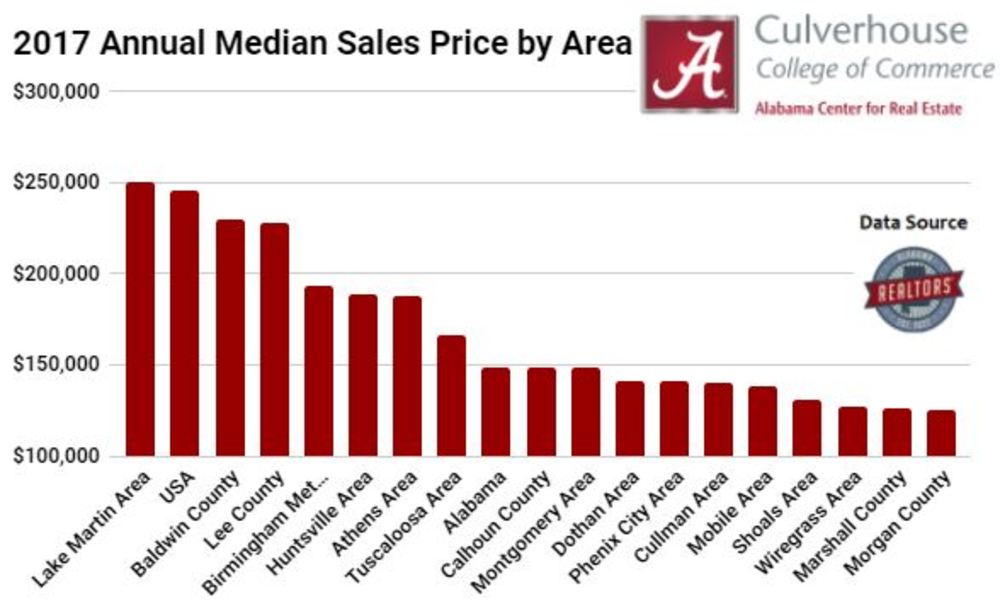 We’ve closed out the 2017 year in residential real estate, and now it’s time to take a look at the data and put it into context. The big takeaway from the graph above is that when compared to the country as a whole, Alabama’s real estate is relatively affordable. ACRE warehouses sales and price data for every major residential real estate market in Alabama. Only one has a median price above that of the national median price and it’s the Lake Martin area.  But this is a relatively small market with a small sales volume (with 665 total residential transactions in 2017 and 500 in 2016) and many upscale properties. This market is an outlier when compared to the rest of the state.

So were back to the big question...how affordable is housing in Alabama? ACRE recently addressed this question with it’s Alabama Housing Affordability Index.  “The statewide housing affordability index is calculated as the ratio of the state’s actual median family income to the income needed to purchase and finance the state’s median priced home. An index number of 100 means that a family earning the state’s median income has just enough buying power to qualify for a loan on the state’s median priced, single-family home, assuming standard underwriting criteria. The higher the index number is, the more affordable the housing.” The Alabama Housing Affordability Index was recently calculated at 184.3, meaning that an Alabama family which earns the statewide median income of $55,500 had a little over 1.8 times the income needed to qualify for a loan to purchase the statewide median priced home. The Mobile metro area had an index score of 210.2 and the Gadsden area had an index score of 238.3, meaning these were two of the more affordable real estate markets in the state.  Also, the statewide score of 184.3 is encouraging news for Alabama home buyers.

As a state we have seen huge job growth in recent years, especially in the automotive and aerospace industries. Here are a few quick examples. The recent acquisition of Shipt by Target is a huge boost for Birmingham’s growing technology sector. A Bloomberg analysis recently identified Huntsville as the third most technical workforce in the United States. And Toyota-Mazda recently announced plans to build a major manufacturing facility in Huntsville. Job opportunities for Alabamians are growing, and the data suggest that our housing markets are quite affordable. Combine a skilled workforce with affordable real estate and it is not surprising that so many big name companies are investing in Alabama.

Let’s take a closer look at companies who have recently chosen to invest in Alabama. Toyota-Mazda is the biggest and most recent addition to Alabama’s already impressive automotive manufacturing sector.  Autocar recently announced plans to build a $120 million truck assembly plant in Birmingham.  Mercedes recently announced its plan to invest $1 billion in an electric car and battery facility in Bibb County.  Who would have thought that in 1993 when Mercedes announced its Tuscaloosa County factory that 25 years later Honda, Hyundai, and Toyota-Mazda would have manufacturing facilities in Alabama? Alabama really has come a long way.

Lee County is another surprise from the graph above. Their annual median price rivals that of Baldwin County, luxury beachfront condos included. Total residential transactions for the year are up 27 percent from the 5 year average. The annual median price has grown by 26 percent since 2012. Properties in Lee county are selling much more quickly than in the past, with properties averaging 192 days on the market in 2012 and 68 days in 2017. For entertainment’s sake, ask the people in your network about the most expensive residential real estate markets in the state. See how many put Lee County in the top 3.

We are about to get our first 2018 sales data as January is now in the books. Hopefully the positive trends in Alabama’s residential real estate markets will continue. ACRE’s January reports will be coming out by mid-month and for a solid and unbiased look into the real estate markets, just see what the data has to say.