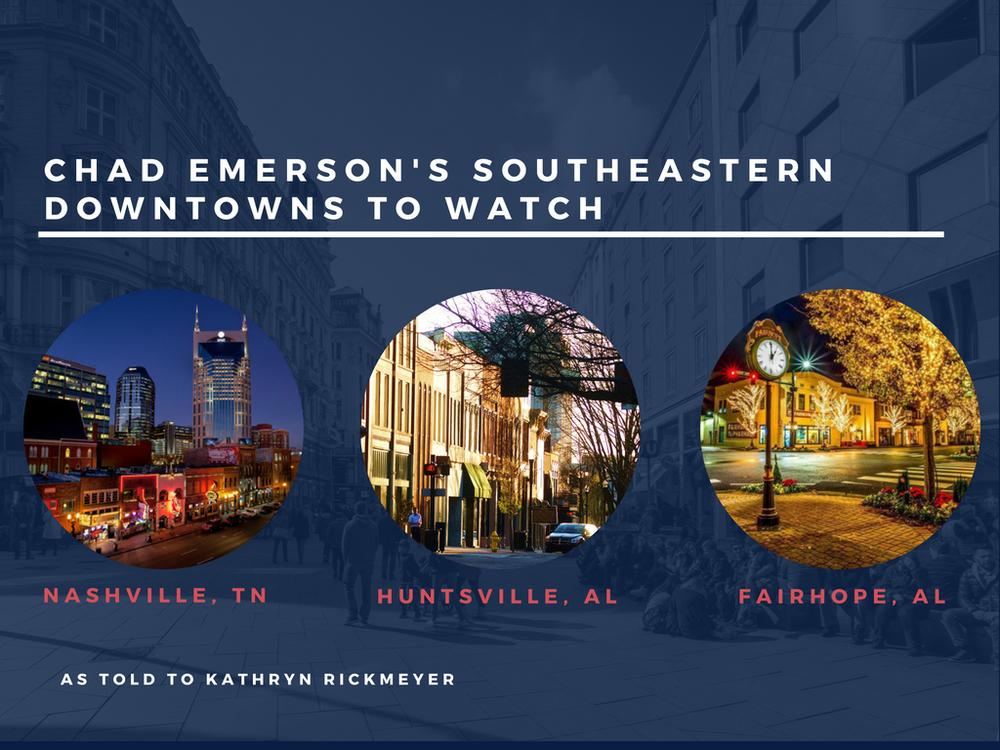 as told to Kathryn Rickmeyer

Over the last two decades, there has been a resurgence in the revitalization of downtowns across the country. The reinvention of these downtowns relies heavily on carefully planned housing developments that accommodate multiple generations and the ability to create transit connectivity.

Nashville, Tennessee is on fire. In 2017, The Wall Street Journal named it the second-fastest growing metropolis in the nation. Many accredit the city’s success to its thriving startup scene and country music ties, but there is much behind the prosperity of this city than tech companies and the Grand Ole Opry.

“Nashville’s downtown encompasses five or six different areas within its central core. This means there are a variety of ways to experience the downtown in terms of housing and office types—from lofts to brownstones to detached homes,” said Emerson

Emerson continues detailing the importance of a heterogeneous mixture of economic classes and generations.

“Downtowns that offer price-points other than the just ‘expensive’ housing are the downtowns that will succeed. By encouraging different housing types, downtowns can attract a wider variety of residents from young singles to families with kids to empty nesters and more

Downtowns have to be multigenerational to be sustainable.

He offers the Gulch neighborhood, located between downtown and Music Row, as an example. “The neighborhood features dense, vertical developments. They’ve essentially created a mini-Manhattan that appeals to individuals and families of different sizes,” said Emerson.

Miles away is Germantown which offers a different cityscape. “Germantown offers everything from brownstones and detached cottage homes. That results in a diversified type of resident user.

What issues does Nashville face?

According to Emerson, one the deciding factors on whether or not Nashville will go to the next level is largely based on the development and integration of public transit. Currently, almost all of the city’s transportation is vehicular movement.

Ranked seventh on USA Today’s Best Places to Live List this year, Huntsville, Alabama is making a name for itself.

Huntsville’s Downtown is growing and features a wide array of living opportunities from well-maintained historic homes to garden homes less than a mile away. In the past, there were not as many multifamily opportunities. In the last three years, two luxury apartments have been added increasing activity and drumming up enthusiasm with millennials.

“It’s a more compact city center. You can walk from one end to the other very conveniently,” said Emerson.

What issues does Huntsville face?

We have to figure out connectivity. How do you connect the surrounding downtown area districts to the core of downtown? Memorial Parkway and Governors Drive are two massive roads that are not convenient for pedestrians to cross. It makes downtown and the rest of the city seem father in distance than they really are,” said Emerson

“Fairhope was built in a bucolic setting. It’s a few blocks from the bay with an intentionally planned street-grid layout,” said Emerson.

While traditional downtown loft opportunities aren’t as prevalent in the area, as they are in larger metro’s such as Nashville, the downtown quarters offer a variety of housing types.

“People can live in a garden home or a bungalow just two blocks away from both the bay and the historic downtown,” said Emerson.

What issues does Fairhope face?

“There is more demand for their downtown than what it was designed for. Extending the grid and pedestrian connectivity is critical. They need to emphasize increased pedestrian-centric development outside of the historic grid,” said Emerson.

Chad serves as the President & CEO for Downtown Huntsville, Inc. He previously served as Director of City Development for Montgomery, Alabama as well as a consultant to over 30 different cities on downtown and urban redevelopment strategies. He received his undergraduate degree from Lipscomb University and his law degree from the University of Tennessee. He previously taught at Jones School of Law.