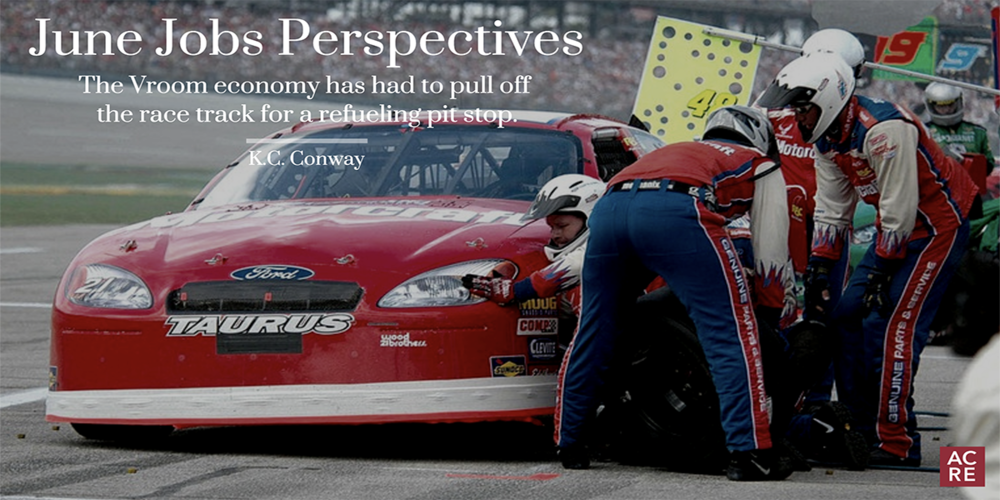 Just when things were going so well the first four months of 2019, the Vroom economy has had to pull off the race track for a refueling pit stop. The question is whether the pit crew (Congress, President and Fed) has an appropriate high-octane fuel on hand (something other than low-octane, interest rate cuts) or is Vroom sidelined by tariffs, slowing job growth and an inverted Yield-Curve?  Let’s review the latest May period jobs numbers and do the diagnostics on the jobs fuel system.

ADP’s May Private Payrolls Report: On Wednesday June 5th, we received the ADP private payrolls report. It was the first communication to the economic pit crew that there was a problem with the Vroom economy – and it was likely unrelated to tariffs as this period preceded the increase to 25% tariffs on China and threatened 5% on Mexico.  ADP reported just 27,000 new payrolls for the latest May period, versus expectations of 180,000.  Although that was a surprising overall figure, further diagnostics revealed a deeper concern, that being the fuel injection system for small business job creation was gummed up and declined 52,000 jobs. That’s right, small business private job creation by companies with less than 500 employees contracted more than 50,000 jobs in May. That hasn’t happened since this recovery commenced 118 months ago. Those that follow KC-nomics and the ACRE Weekly Insights (WIN) know that NFIB Small Business Optimism is one of the four pillars of the economy that I monitor most closely (the others being Rail Traffic, the spread between 2-Year and 10-Year Treasury bond yields, and TREPP commercial real estate loan performance measures). Therefore, ADP warned us that the government's May jobs report released Friday, June 7, 2019, was likely to disappoint – and boy did it! The key measures and graphic to note from the May period ADP jobs report are:

BLS June Employment Situation Report for May Period: On Friday June 7th, the Bureau of Labor Statistics reported a disappointing jobs report for the May period that ADP warned was coming. The BLS report revealed that May produced just 75,000 jobs. While this was more than a 100,000 jobs miss from expectations, other metrics in the report are likely to keep the FED on “Let’s think about it but not act yet” mode for their June 18-19 FOMC meeting. Those metrics are: i) <4% unemployment rate at 3.6% and U-6 (total unemployment) down to 6.7% or lowest rate of 2019; ii) rising wage rates (up 0.2% in May on heels of +0.3% in April and 3% YOY), and private payrolls still positive with +90,000 jobs in contrast to the -52,000 in ADP June report for May period.  However, note the jobs revisions were all downward for March and April.  April’s +263,000 jobs was revised down almost 40,000 jobs to +224,000. That is a material downward revision and conveys May was likely more than a blip. March, April and May all showed decelerating job growth that now averages just 151,000 per month in 2019. Two other metrics to note are: i) the Labor Participation Rate - which declined back below 63% again to 62.8%; and ii) decline in the number of persons employed part time for economic reasons declined by 299,000 in May to 4.4 million. When this measure declines, and total monthly job creation declines to anemic levels like it did in May, employers are signaling they are even curtailing hiring part-time employees as well. In other words, the June BLS jobs report is likely more than a blip for May. Like ADP, even the government jobs report signals the Vroom economy needs to pit for refueling and diagnostics.

What does it all mean, and what next? The respective June jobs reports are signaling the Vroom economy is low on fuel, and there is likely a more complex diagnosis than: “It’s just tariffs.” The retail store closings (now exceeding 7,000 stores in 2019) are showing up in the employment data. While the retail picture may not be abysmal as the “New Retail” jobs in logistics are not counted as retail jobs by the BLS, retail store closings are a factor in these May jobs figures. And the ubiquitous “let’s blame weather” may be a legitimate influence in May due to the flooding in Arkansas and the Midwest that rippled out into things like rail, interstate traffic, and logistics disruption. But regardless of the data metrics, it’s the psychology that matters.

The uncertainty from tariffs, an inverted Yield Curve that has the 10-Year Treasury a hair above 2.05%, the Fed talking rate cuts, and the stock market volatility are clouding what the Vroom Pit-Crew can do to restore the Vroom economy to the race track. I am NOT in the camp that Fed rate cuts mitigate any of the tariffs impact. In my opinion, rate cuts now will only fuel market anxiety that a recession is ahead - and Vroom is dead. What ails the Vroom economy cannot be medicated by the Fed or monetary policy.  Tariffs, trade uncertainty, supply chain disruption, etc. are items that only the legislative and executive branches can address. Last time I checked, the Fed was not a branch of government with any constitutional authority. The Fed needs to continue being on “pause mode” and wait on Congress and the president to do their jobs, ratify USMCA before the August recess, and see what the Q2 and Q3 GDP data show in August and October. Like last December, the Fed should be patient and connect the data that it claims it is so dependent upon. Calm heads, action on USMCA and removing uncertainty from the market are what the Vroom Pit Crew need to focus on. This economy will not run with Vroom again on low-octane Fed rate cuts fuel. Vroom won’t return until high-octane fuel is flowing through the system again.