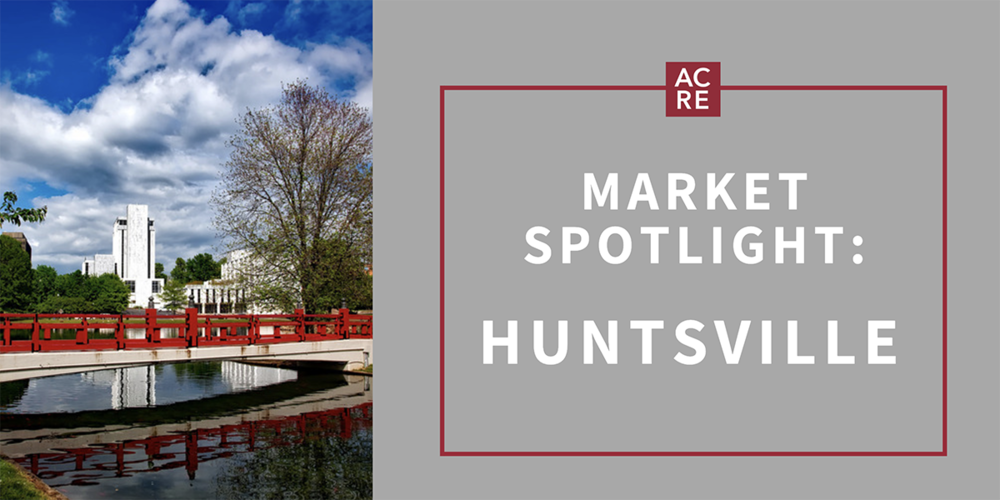 It’s hard to miss the many headlines coming out of Huntsville these days. It’s sustained population growth suggests that it will surpasses Birmingham as Alabama’s largest city by 2024. U.S. News & World Report recently named Huntsville as the most affordable place to live in the United States out of the 125 most populous metro areas in the USA and the 11th best place to live. 24/7 Wall St. recently listed Huntsville 3rd in their cities with the most high tech jobs analysis. The Wall Street Journal recently placed Huntsville 3rd in their list of where you should move to make the most money. And the S&P just gave Huntsville it's highest AAA rating that gets assigned to just 1 percent of America's 22,000+ cities.

With all the positive attention, it is not surprising to see many companies investing in the Huntsville area. With population and job growth in recent years, Huntsville’s residential market is reaching new heights. Demand for housing in the area has outpaced supply, creating unique market conditions. For example, Huntsville (Madison County) had only 1.7 months of supply during April. Most real estate professionals cite 6.0 months as the equilibrium point, where buyers and sellers have roughly equal bargaining power. To go one step further, if no new listings were added and the current sales pace continued, all inventory would sell in approximately 1.7 months. 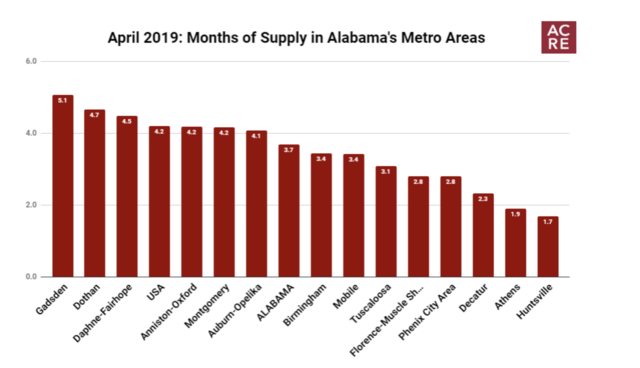 As a result, Huntsville is the strongest seller’s market in the state currently. Nearby Athens with 1.9 months of supply reflects similar market conditions as demand has outpaced supply in recent years.

2018 was a record year for residential real estate in both Huntsville and Alabama. At the statewide level, 2018 was quite significant as the total number of closed transactions surpassed the high-water mark set in 2005. Huntsville was ahead of the curve as the pre-recession home sales peak in 2006 was surpassed in 2017. One of the challenges that the Huntsville market faces is sustaining the impressive sales pace set in 2018. Things are looking thus far as year-to-date sales in the area are up 2.4 percent. This might not sound like impressive sales growth so far in 2019, but remind yourself that 2018 was a record year for Huntsville’s residential markets.

Home price appreciation is on the rise in Alabama’s metro areas. All 14 markets have year-to-date (YTD) growth in median sales price. Although Gadsden leads the way with 12.5 percent, many north Alabama markets are near the top of the rankings in this category. The Decatur area’s (Morgan and Lawrence Counties) median sales price is up 10.2 percent YTD, Athens (Limestone County) is up 11 percent and Huntsville is up 8.4 percent. The simple fact that the top 4 markets for YTD median price appreciation are in the north Alabama region suggests that growth in Huntsville has ripple effects for communities across the region.

While growth of the strong regional economy is the tide that rises all ships, strong price growth in Huntsville and north Alabama is driven, in addition, by tight inventory. During April, residential listings in Huntsville declined 32.1 percent from year-over-year from 1,707 to 1,157, the largest percent decline among Alabama’s metro areas in April. Again, it’s not just happening in Huntsville, it’s happening in the region as well: Down 28.3 percent y/y in Athens, down 30.7 percent in Decatur, down 18.4 percent in Gadsden, and down 16.5 percent in Anniston-Oxford. Limited inventory adds upwards pressure to home price appreciation as buyers compete with one another for a relatively small number of listings, which has become the new normal in Huntsville and the north Alabama region.