The city of Homewood has all of the right amenities a family looks for when home shopping.

There’s the top-rated schools, the parks and the retail, but the city is also missing a key catalyst for growth – new homes and land to build.

It’s the city’s first new residential subdivision in over 10 years.

The homes will be built in the area near Edgewood and will be zoned for Hall Kent Elementary School, which is consistently ranked as one of Alabama’s best schools.

“Homewood is a quintessential community,” said Eric Rogers, with Progressive Properties. Rogers is a native of Homewood. Rogers said he is familiar with all of the things Homewood has to offer, including its geographic proximity to the city of Birmingham and other prominent cities in the area.

“All of those attributes that define Homewood are fueling Homewood’s success,” Rogers said. “As a result of the demand, there really isn’t very much available, reasonably-priced land in Homewood.”

While many communities in Alabama, and nationwide, are dealing with low inventory levels due to a lag in new construction, Homewood’s limited land supply has created another layer of issues when dealing with new builds.

“I think it absolutely fits into a place where there is a hole in the market,” said Brian Boehm, a Realtor with RealtySouth and the exclusive listing agent for Edgewood Place Townhomes. “It’s hard to find new construction around that $300,000 price.”

According to data obtained by the Alabama Center for Real Estate, three-bedroom, two-bath homes surrounding the Edgewood Place Townhomes development average 1,300 square feet, compared to the new development’s 1,700 to 1,850 range, with a median sales price of $325,000, putting Edgewood Place’s price per square foot well below the normal home in the area.

Boehm said the project boasts rare amenities for the Homewood area, such as the one-car garage for each house.

“When I met with the developer, they showed me their floorplan, and I thought they had something Homewood would enjoy,” Boehm said.

Rogers said that house hunters looking at Homewood, who are interested in new builds, generally buy an existing lot, remove any current structures and build their new home.

“That is happening at a very rapid pace,” Rogers said. “Our project is specifically important because it offers a new high-end home with a price point that is affordable at a time when cost is becoming expensive.”

According to a recent article by AL.com, Homewood’s median sales price for homes has risen from $255,000 in 2011 to $314,250 in 2016, with the number of days listings stay on the market dropping in some areas to the single digits.

“Homewood is truly an idyllic place,” Rogers said. “It’s a thriving city defined by a genuine sense of neighborhood and community at a level that cannot easily be created or replicated. Rather, the success that Homewood has achieved and continuously builds upon requires engaged, long-term commitment from both the private residents and public leadership. It is not something that can happen overnight. It requires, among other things, adequate resources and appropriate investment and allocation of these resources, directed by exemplary leadership, all in an effort to achieve the highest possible return for the residents, visitors and businesses that choose Homewood. The result is top notch schools on every level, continuously improved public infrastructure, strong retail/economic development and an overall superb quality of life. All of these attributes, along with many more, define Homewood.”

Rogers expects phase one of Edgewood Place to be complete in the next few months. That will include six of the ten townhomes. 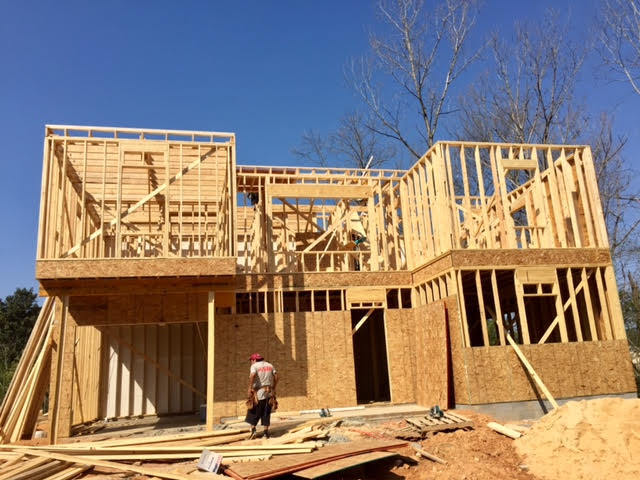 Construction is underway on phase one of Edgewood Place Townhomes in Homewood.