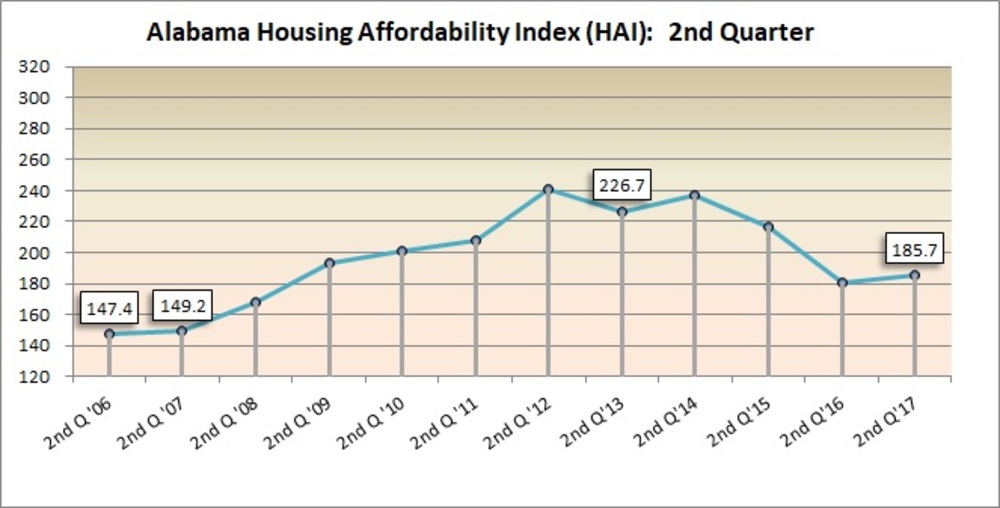 The standard definition used by the Alabama Center for Real Estate in describing the statewide housing affordability index is as follows: “The statewide housing affordability index is calculated as the ratio of the state’s actual median family income to the income needed to purchase and finance the state’s median priced home.  An index number of 100 means that a family earning the state’s median income has just enough buying power to qualify for a loan on the state’s median priced, single-family home, assuming standard underwriting criteria. The higher the index number is, the more affordable the housing.”  The median home price for the quarter used for the calculation is computed from the median prices of homes sold in the reported areas during the last three months in Alabama. The composite monthly interest rate is the average the interest rates of the three months of the quarter of the effective rate of the national averages for all major lenders of loans closed on conventional mortgages as published by the Federal Housing Finance Agency.

The Estimated Median Family Income projections are produced by HUD and are provided annually.  Following are the changes in the projections from 2016 to 2017. The projections show increases in income in 10 of seventeen areas. This is compared to nine areas, of the seventeen shown, that had reductions from 2015 to 2016 in Alabama. The national median family income shows a slight decrease of 3.56 percent.

For the County Areas, the HAI results from the second quarter in 2017 showed that Cullman County had the strongest results and achieved a 103.91 percent increase with an affordability index of 195.6  (Please review the AHAI chart for specific details.)

*It should be noted that the numbers used to compute the AHAI reflect mostly urban areas, which have significantly higher income levels than those of rural areas in the state.  Also in smaller volume reporting areas, a relatively small change can cause a large percent of increase or decrease.  Please review the Monthly Housing Statistics posted on the ACRE website at http://www.acre.cba.ua.edu/ to review the volume of sales that produced the Median Home Price for each reporting area.

All Posts
PrevPreviousColey: The Flaw in Technology
NextACRE Engage to debut in three Alabama cities in AugustNext
X