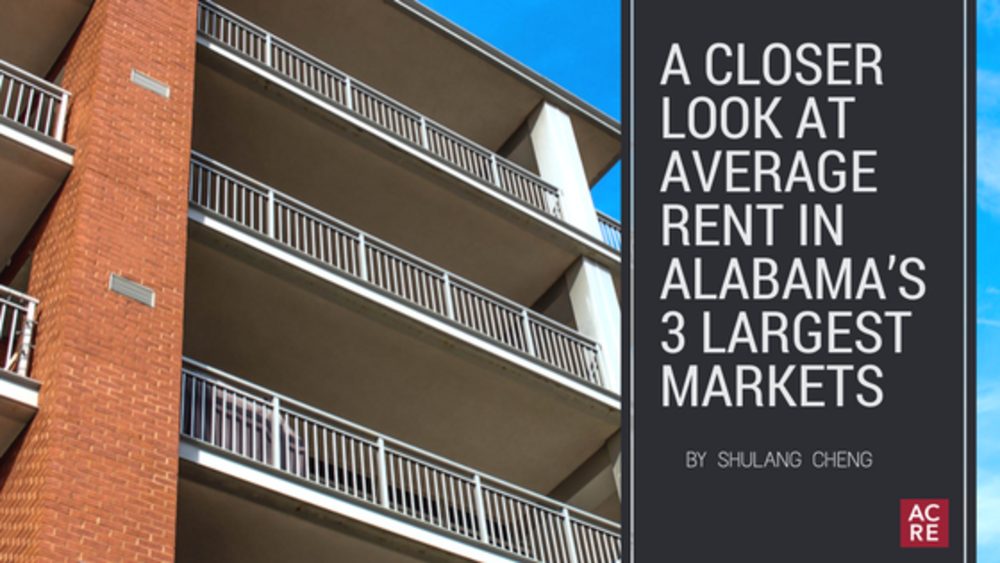 The Zillow Rent Index (ZRI) combines homes and multifamily rental properties to give an overview of the rental market. As of March 31, 2018, the Zillow Rent Index for the nation as a whole was $1,447, an increase of 2.7 percent from one year ago. The ZRI for Alabama was $980, a 1.7 percent increase compared to one year ago. Let’s take a closer look at average rent in Alabama’s 3 largest markets, Birmingham, Huntsville, and Mobile.

Birmingham is the biggest city in the state, with a population of 1,147,417 in Birmingham-Hoover area, and it has become one of the more attractive areas to live for millennials for its small business friendliness and popular food scene. Birmingham, once named the No. 1 American city for millennial entrepreneurs, and this reputation has helped develop the local real estate industry. According to Zillow’s report for March 2018, the average rent price in the Birmingham metro area was $1,054, an increase of 0.8 percent from one year ago. Some of the lowest rent in the metro area is found in the city of Birmingham where the average monthly rent is $748, unchanged from this time last year. For other cities in the Birmingham metro area, such as Hoover, Homewood, and Gardendale, the average prices are higher. Gardendale had an average rental price of $1,149, which was $518 below Hoover’s average rental price of $1,667 and $637 below Homewood’s average rental price of $1,786.

Huntsville’s rental market grows in accordance with the city’s rapid development. Big companies such as General Electric, Boeing, and IBM have offices located in the Huntsville area and provide jobs in STEM (Science, Technology, Engineering, Mathematics) fields. According to Moneywatch, Huntsville’s one-year tech job growth was 309 percent, which is a huge attraction for technology workers. The Huntsville metro area had a population of 449,720 in 2016. According to Zillow, the average rent in Huntsville was $1,097 in March 2018, showing a 0.6% month-over-month rise and a 1.9 percent year-over-year rise. Harvest, a neighbor city to Huntsville, had an average price of $1,191 and saw a rise of 0.6 percent on monthly rent when compared to the prior month. Madison, another city in the Huntsville metro area, had an average monthly rental price of $1,351 in March 2018, which was $254 above Huntsville’s average monthly rental price.

Mobile, as the second biggest city in the state of Alabama, has 414,836 residents in its metro area. The report on Zillow shows that as of March 2018, the average monthly rents in the Mobile metro area was $928, showing a decrease of 0.3 percent month-over-month and a decrease of 0.2 percent year-over-year. The average rental price in Mobile city was $938, which saw a 0.1 percent year-over-year decrease. As for some other cities in this metro area, Grand Bay was the most expensive in March at $999, while Pritchard was the least expensive at $755. Axis showed a strong signal for the rental market with a the largest year-over-year increase at 3.7 percent, while the largest year-over-year decrease in rental prices (-4.1 percent) was in Semmes.