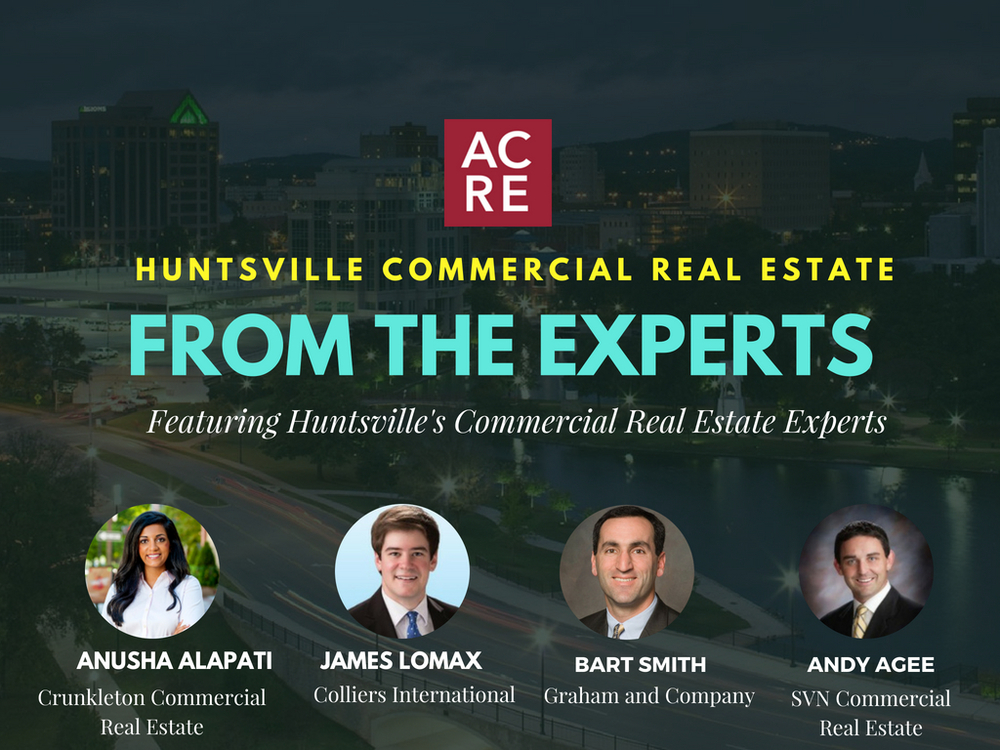 Huntsville’s metro is still growing at a fast pace and Huntsville’s healthy economy has set the stage for a strong retail market. The overall vacancy rate declined from 4.6% in 4Q17 to 4.3% in 1Q18. Retail demand is very strong with over 1 million square feet under construction. CoStar research reports that Huntsville boasts some of the highest rental rates in the state with rental rates reaching their pre-recession peak.

The start of 2018 gives every indication that the office market continues to remain robust and tenants continue to show confidence in both the economy and the market. Politics aside, The Trump administration and Congress have continued to fund defense spending and the Huntsville market has reaped the benefits of those actions. All major metrics indicate that the Huntsville office market is steadily moving forward:

Downtown things are coming at a premium, even as new supply heads to the market. When we compare the downtown market to the suburban market, Class A rental rates are increasing rapidly with the average quoted rent at $25.33/sf while the suburban Class A product is at $20.87/sf. However, when you compare all classifications, the average rates are $20.75/sf (downtown) and $13.91/sf (suburban). Additionally, since Class C vacancy remains in “double-digits”, the overall vacancy for the Class C product increases rapidly as demand for it subsides.

A few major developments proposed or under construction are starting to take life.

Recent previous years within our market were stagnant, but with active construction & development, rising rates, and active tenant base, the market is poised to keep chugging at a high level.

In the first quarter of 2018, the Huntsville, Alabama, apartment market saw few transactions, but continued to enjoy very strong and improving fundamentals.  The announcement of 4,000 new jobs locating to the area with the planned Toyota/Mazda plant near the I-565 and I-65 Exchange in West Huntsville, solidified Huntsville in the eyes of a growing number of equity investors and lenders as one of the most attractive growth markets in the Southeast with a median household income that is over 15% more than the average in the state.  With sustained job and population growth on the horizon for as far as the eye can see, Huntsville is seeing opportunistic apartments investors knocking on almost every door looking for a willing Seller.

In 2018, this growing flood of new prospective buyers continued to put upward pressure on prices in Huntsville, and this,coupled with the acute lack of inventory available, promises to uplift the apartment market over the coming 12-24 months, and beyond. While the average rent increase/unit around the country slows to around 3%, rents have increased  5% year over year in the Huntsville area. This trend of rent increases should continue-and quite possibly accelerate-in North Alabama, as rental rates edge closer to those seen in the Birmingham and Mobile markets.

The sales volume in the first quarter has been slower, but below are notable sales:

The Toyota/Mazda announcement in January is the largest project to hit North Alabama in many years – so big that even President Trump tweeted about the good news! The plant will be located on a TVA approved 2,500-acre tract in the Greenbrier area and is expected to create 4,000 new jobs.  At full capacity, the plant will produce 300,000 automobiles annually. The site is located just 14 miles from the existing Toyota engine plant.

The Huntsville industrial market performed well in Q1 2018 with the actual number of available buildings shrinking.   However, overall vacancy did increase to 8.90% from the EOY 2017 rate of 5.97%, primarily due to the closing of two large facilities: the former Qualitest and Navistar plants.

The 805,000 sf former Qualitest campus in Chase Industrial Park is currently on the market for sale.

Activity was strong across all the three industrial markets and is predicted to remain healthy in 2018. The overall vacancy rate per area is as follows:

Supply of smaller industrial buildings is not keeping pace with demand from local supply-chain and distribution users, so speculative construction should increase in 2018. Asking rental rates for industrial spaces have begun to increase locally, especially for availabilities in the 10k to 25k sf range.