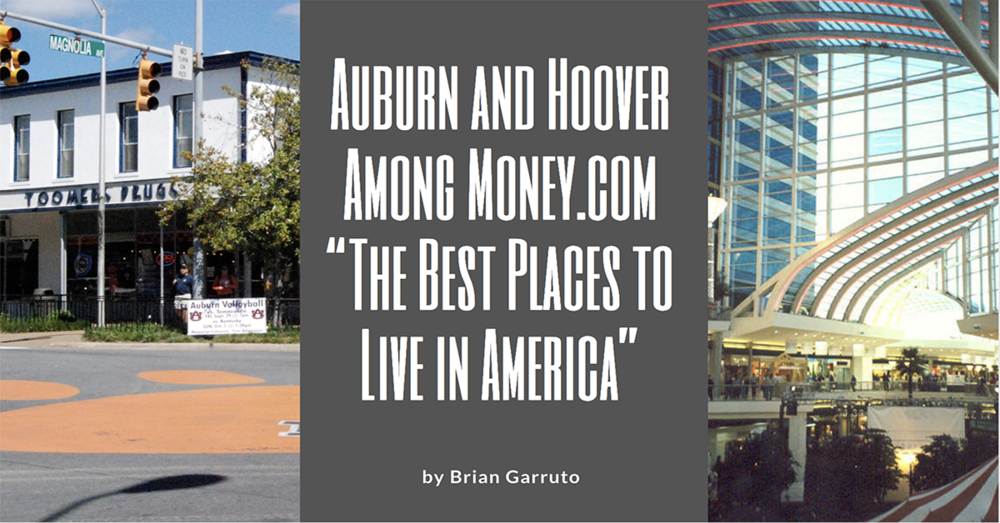 Auburn and Hoover Among Money.com “The Best Places to Live in America”

According to money.com, Auburn and Hoover were both ranked in the top 100 best places to live in America. Auburn placed No. 66 on the list and Hoover came in ranked at No. 84. The main criteria used to judge the cities that were ranked are population, median household income, median home price, projected job growth, average commute, and clear days per year.

Auburn is home to Auburn University which is responsible for creating a diversified population as well as providing the city with its largest employer. The make up of Auburn’s population is 63,118 residents and 27,287 students. Niche.com ranked Auburn as the #5 school district in the state and #207 nationally. Along with a great school district, al.com reported that Auburn is one of the fastest growing cities in Alabama and  has seen a 23.2% population increase over the past 10 years. Additionally, Lee County has relatively low property taxes with an effective tax rate of 0.48%.

Hoover is the largest suburb in the state of Alabama. It is home to the #4 school district in Alabama, #20 best school district for athletes in America, and #77 safest school district in America according to niche.com. Hoover boasts several large corporate headquarters that include AT&T, BlueCross BlueShield, Regions Financial Corporation, and Doster Construction. Additionally, Hoover has numerous retail giants located in a massive retail development at Riverchase Galleria. The Galleria is anchored by Macy’s, Belk, Von Maur, JCPenney, Sears, and Dave & Buster’s. Hoover also has a new development currently under construction. Stadium Trace Village is a 43-acre development that is underway at I-459 (exit 10) and Alabama Highway 150.  Designed as a walkable destination, it will consist of 225,000 square feet of retail and commercial space.