Renewed interest in downtown Birmingham has led to a significant increase in adaptive reuse projects in recent years. The advantages of adaptive reuse versus ground-up new construction are numerous. Many historically significant buildings, for example, sit vacant because of economic or functional obsolescence, and adaptive reuse brings these structures to higher and better uses. The community as a whole benefits as historic structures are saved from redevelopment, preserving an area’s unique character which is often represented by its building stock. Adaptive reuse projects are also unique examples of infill, turning blight into bright.

A good example of adaptive reuse in downtown Birmingham is the Historic Federal Reserve and its annex on Fifth Avenue North. Formerly the Federal Reserve Bank of Atlanta Birmingham Branch, the property was vacant since 2000 when the bank relocated to Liberty Park. Following a $20 million renovation, the former bank is now a multi-tenant development offering office and retail spaces. Harbert Realty Services and Capstone Real Estate Investments partnered for the adaptive reuse project. 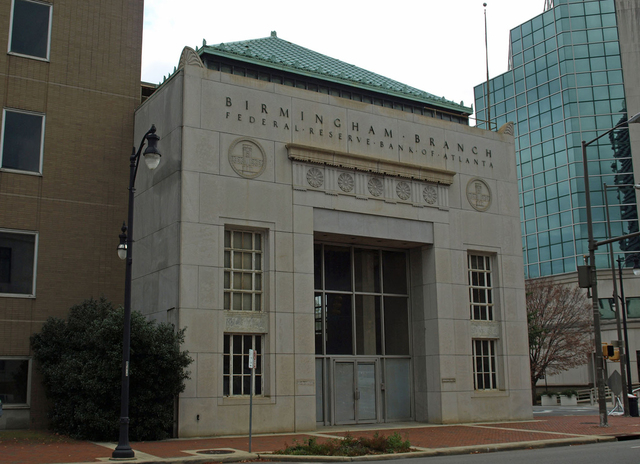 There are a total of five vaults in the Federal Reserve building, creating a unique atmosphere that combines the building’s historical significance with modern amenities. A large vault in the building’s lobby, for example, was renovated into a one-of-a-kind conference room. The renovation was possible, in part, thanks to state historic tax credits which helped offset the cost of refurbishing such a unique and historic structure.

Capstone Real Estate Investments has another adaptive reuse project on the horizon, the old Greyhound Terminal Station. Using the original plans, the property will be returned to its historical condition. Similar to the Historic Federal Reserve, the property’s former use will be visible although it has been adapted into a new use, office space. The property also has an abundance of parking, which is a rarity in the central business district.

Mike Mouron, Chairman of Capstone Real Estate Investments, LLC, highlighted the role of state and federal incentives in the redevelopment of the Historic Federal Reserve and the Greyhound Bus Terminal.

“As an active real estate developer with considerable experience involving a wide variety of project types, I have been exposed to — and benefited from — many forms of governmental incentives. Against that backdrop, I believe the Historical Tax Credit Programs – both the Federal and the State of Alabama’s – to be the most effective in achieving the stated objective. Since the back-up Contract to mine was a parking lot operator, but for those programs, the Historical Federal Reserve would be a surface parking lot instead of the vibrant mixed-use property it is today. As for the old Greyhound Bus Terminal, the rather small building sits on a relatively large parcel of land, so absent the State and Federal Historical Tax Credits it would be in jeopardy of being razed for a more dense redevelopment. Coupled with the Opportunity Zone benefits, adaptive reuse of historically significant buildings makes both financial good sense and is a positive outcome for our community.”

Another successful adaptive reuse project was Bayer Properties redevelopment of the Pizitz. When it was built in 1923, The Pizitz anchored Birmingham’s downtown retail district with over 251,000 square feet of retail space spanning the mid-rise building. The area also included Loveman’s, another large retailer, and many “five and dime” stores. But with the growth of the suburbs and increased competition from shopping malls, the district was soon facing economic obsolescence, which culminated in 1998 with the closure of the department store. The property would sit vacant until Bayer Properties launched an ambitious adaptive reuse project that would breathe new life into the building itself while adding momentum to the downtown area’s rebirth.

Bayer Properties began the $72 million transformation in 2015. Developers were able to preserve the exterior terracotta facade, while also recovering the original beams, columns, hardwood floors, and stairs. They also uncovered the original department store clock which became a centerpiece of the food hall. The mixed-use project also includes retail space, 143 multifamily residences, a multi-use flex space, a rooftop pool, a fitness center, and a 10,000 square foot theatre space complete with a lounge and bar. The property also includes a courtyard with unique art installments. Additionally, The Pizitz hosts The Sidewalk Film Festival each August, which adds to the overall impact of the project and enhances the cultural scene of downtown Birmingham. 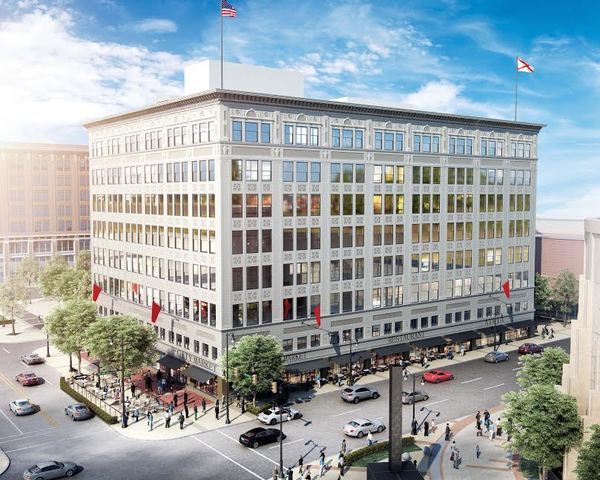 Transforming a long-vacant department store into a highly successful mixed-use development is no small measure, and The Pizitz was recently recognized by Globe Street with an adaptive reuse award in the historic preservation category.

Libby Lassiter, President of Bayer Properties, had the following to say about the decision to preserve The Pizitz and some of the unique amenities the project offers.

“For nearly a century, The Pizitz has welcomed a diverse collection of visitors to experience the charm of downtown Birmingham. Although it is more cost-efficient to build a new structure from ground-up, Bayer’s leadership team recognized the importance of restoring this iconic jewel from the onset. The Pizitz has an incredible amount of character woven throughout, and we are proud to have had the opportunity to implement new elements, such as our first-to-state food hall as well as the Sidewalk Film Center and Cinema, which now provide additional options for out-of-town guests to enhance their stay. The momentum happening across the Magic City is inspiring and we are excited to be a lead contributor to the evolution.”