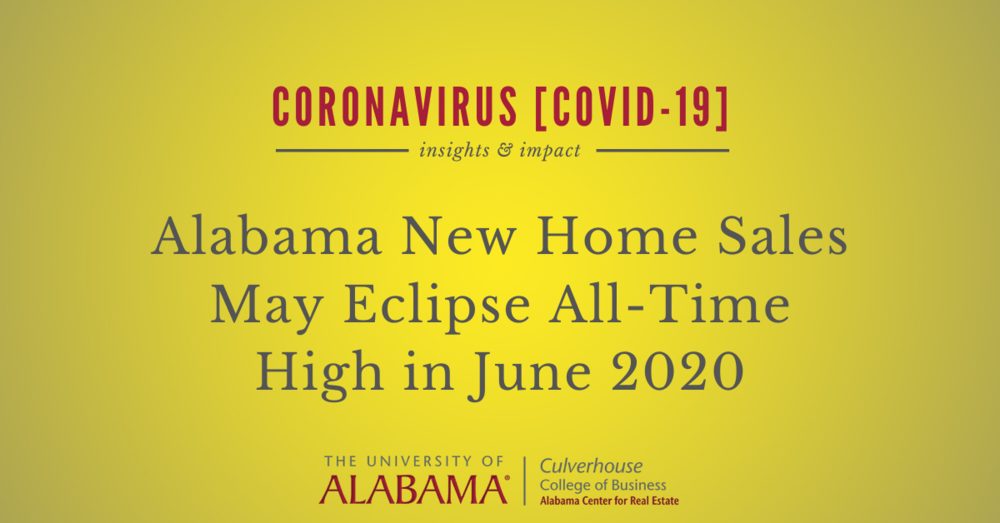 With 10 of 13 markets reporting new construction sales data for June 2020, it appears likely that new home sales will surpass the 1,000 mark for the first time, according to ACRE’s database.

While total home sales (existing homes, new construction, and condominiums) declined year-over-year in April and May, many areas have reported rebounding sales activity in June. New construction sales, on the other hand, have continued to trend upwards by posting ten consecutive year-over-year (Y/Y) gains, with an eleventh very likely in June.

Among markets with a larger sample size of closed new home sales, Baldwin County saw the largest Y/Y increase in total sales activity in June, rising 52.7% from 150 to 229 closed transactions. Sales were also on the rise in the Birmingham area (33.5% increase Y/Y from 185 to 247 sales), the Huntsville area (20.4% increase Y/Y from 191 to 230 sales) and the Mobile area (22.6% increase Y/Y from 31 to 38 sales). June sales data for the Montgomery area will be available soon.

In Alabama’s mid-size metro areas, Athens continues to post growing new construction sales. Population and economic growth in the area has driven demand for new home sales, along with the area’s proximity to nearby Huntsville. New home sales increased 45.6% Y/Y from 57 to 83 closed transactions. New home sales represented 37.4% of all residential sales in June, and the Athens area consistently has the highest percentage of new home sales of all the state’s metro areas. It is also worth noting that Athens has a sizable amount of new construction activity, especially given its population. For example, the area routinely sees double the amount of new home sales when compared to the much larger population of the Mobile area.

New home sales were also on the rise in the Tuscaloosa area in June, increasing 43.3% from 30 to 43 closed transactions. Marshall County and the Calhoun County area also saw rising sales activity (up 233.3%), although the number of closed sales is relatively small (10 closed sales in each area in June) compared to other metropolitan areas. The Gadsden area, however, did see declining sales activity in June (new home sales declined from 3 one year ago to 2 in June 2020), and new home sales in the area remain slight, especially in light of the area’s population.

Growing new home sales, even during the pandemic months, reflects a larger trend of the growing appeal of America’s suburbs. Not surprisingly, this is where a majority of new construction projects take place, both historically and today. An estimated 175 million Americans live in the suburbs, over half of the US population. The elements of suburbia that fostered criticism in years past have become amenities, arguably, during the coronavirus era.

Architects Ellen Dunham-Jones and June Williamson have identified characteristics of suburban form that were in-need of modernization (before the pandemic) such as: “The dominance of low-density buildings, an emphasis on private spaces instead of public ones, the reliance on single-use rather than mixed-use zoning, an almost complete dependence on the automobile, and dead-end roads that make street networks less useful.”

In light of the pandemic, and the recent surge in cases, it seems as though the amenities of lower density, fresh air, and a little space to call your own (in the suburbs of large or mid-size metro) have never looked so good.