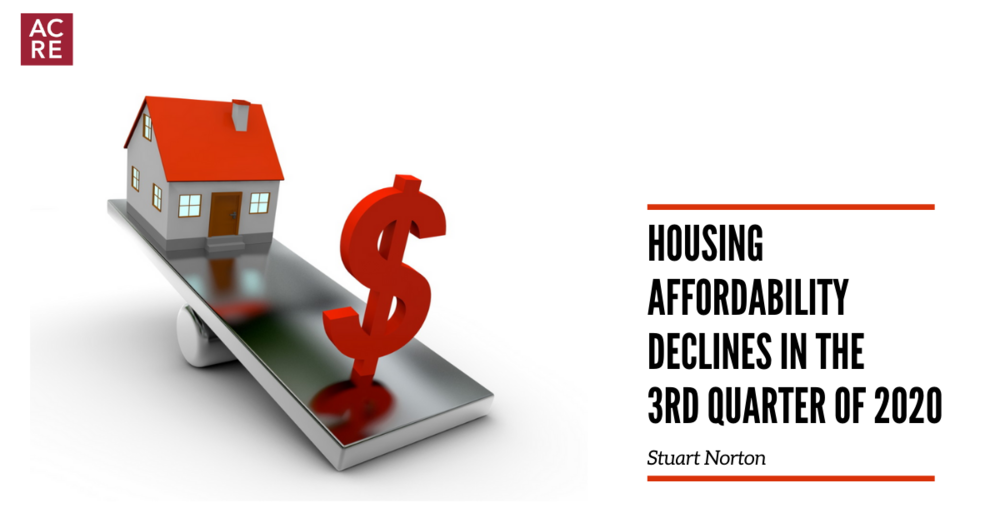 As measured by the Alabama Housing Affordability Index (AHAI), housing affordability in the state declined 3.7% quarter-over-quarter. Although median family incomes were on the rise in 7 of 12 metro areas, and rates on a 30-year fixed mortgage are nearing historic lows (composite rate of 2.95% in Q3 2020), home price appreciation continued to trend upwards in the third quarter of 2020. The statewide median sales price increased 7% quarter-over-quarter and 14.4% year-over-year, resulting in a slight decline in housing affordability.

Even as the composite rate for a 30-year mortgage dropped below 3% during the third quarter, declining affordability was mainly due to rising median sales prices. The impact of the pandemic to residential markets has been broad, but one of the more significant effects has been the reduction in properties listed for sale. Inventory was low coming into the pandemic, and has tightened further as a significant number of prospective sellers choose to wait for more stable times. September listings declined 33% year-over-year in Alabama, while the inventory to sales ratio (months of supply) declined from 3.9 to 2.1, significantly below the equilibrium point of 6 months of supply. This tightening of supply was a major reason for the significant price gains seen in markets across the state.

The drop in September listings marked 67 consecutive months of Y/Y inventory declines in Alabama, with the last gain in February 2015. Inventory has tightened further due to the pandemic, with inventory declines averaging 15% in the first quarter of 2020, 21% in the second quarter, and 30.3% in the third quarter. Mobile has the state’s longest streak of inventory declines (83 consecutive months), a trend that began in November 2013. The trend of increasingly tight inventory, both in Alabama and the United States, has played a significant role in the upward trajectory of median sales prices. For home buyers, however, historically low interest rates have helped offset, to some degree, rising home prices.

Nationwide, housing affordability also declined slightly when compared to the second quarter of 2020. The index score decreased slightly (-3.3%) from 163 to 158. Similar to markets in Alabama’s metro and non-metro areas, gains in median family income (in most areas) and declining mortgage rates helped offset rising home prices. Home sales prices have grown at higher rates during the pandemic than they were pre-pandemic, with the Q3 nationwide median sales price gaining 7.3% quarter-over-quarter, and 11.7% year-over-year.