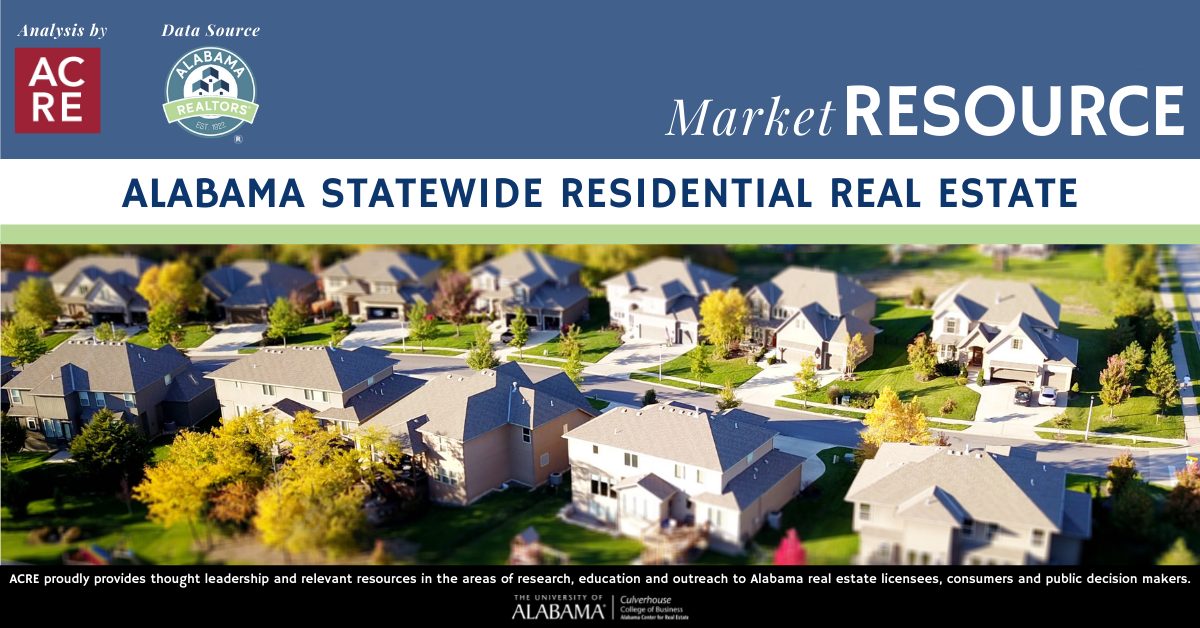 Statewide Summary: Home sales cooled off in April, falling 6.0% from one year ago. Fast-rising mortgage rates, rising home prices, and inflation have resulted in a slower pace of buyer activity. More declines are expected in the coming months as home sales are likely to return to pre-pandemic levels. Slowing home sales will encourage home price growth to readjust towards more sustainable rates while also encouraging a gradual increase in supply.

Home sales prices continue to trend upwards with the statewide median sales price reaching the highest level on record in April ($234,100), an increase of 16.0% from one year ago. As demand slows, price growth is expected to moderate to the 8-10% range by the fourth quarter of 2022.

After reaching a record low in February 2022, inventory is beginning to trend upwards. April listings increased 24.2% from March and increased 4.3% from one year ago, the first year-over-year inventory gain at the statewide level in over seven years. Inventory is expected to continue growing but at a slow pace as sales activity cools. The imbalance between supply and demand, however, continued in April with just 1.5 months of supply, while a balanced market has 4-6 months of supply.

Sales: According to the Alabama Association of REALTORS, April home sales in the state decreased 6.0% year-over-year (Y/Y) from 7,068 to 6,643 closed transactions. Going against seasonal trends, sales decreased 4.8% from March. Sales are down 1.3% year-to-date. Two more resources to review: Quarterly Report and Annual Report.

Inventory: April listings (9,992) increased 24.6% from March and increased 4.3% from one year ago, the first Y/Y inventory gain since February 2015. At the current sales pace, all the active inventory on the market would sell in 1.5 months, up from 1.2 in March and up from 1.4 months in April 2021. The equilibrium point where buyers and sellers have roughly equal bargaining power is 4-6 months of supply.

Pricing: The statewide median sales price in April was $234,056, a record high and an increase of 0.7% from March and an increase of 16.0% from one year ago. The differing sample size (number of residential sales of comparative months) can contribute to statistical volatility, including pricing. ACRE recommends consulting with a local real estate professional to discuss pricing, as it will vary from neighborhood to neighborhood.

Homes sold in April averaged 41 days on the market (DOM), 18 days faster than one year ago.

Forecast: April sales were 54 units, or 0.8%, above the Alabama Center for Real Estate’s (ACRE) monthly forecast. ACRE projected 6,589 sales for the month while actual sales were 6,643 units. ACRE forecast a total of 23,145 sales in the state year-to-date, while there were 23,805 actual sales through April, a difference of 2.9%.

National Summary: According to the National Association of Realtors (NAR), existing home sales declined for the third consecutive month in April, falling 2.4% from March (seasonally adjusted annual rate). Sales increased from the prior month in the Northeast and Midwest, while they slowed in the South and West regions. Year-over-year, national home sales declined 5.9%.

The median sales price for all housing types was $391,200, rising 14.8% year-over-year and marking 122 consecutive months of year-over-year gains. Rising home prices are largely a result of low housing inventory amid sustained demand. Existing home inventory totaled 1,030,000 listings at the end of April, up 10.8% from March 2021 and down 10.4% from 1.15 million listings one year ago. April’s 2.2 months of supply (MOS) increased from 1.9 during March but is down slightly from 2.3 one year ago.

Lawrence Yun, chief economist for NAR said, “Higher home prices and sharply higher mortgage rates have reduced buyer activity. It looks like more declines are imminent in the upcoming months, and we’ll likely return to the pre-pandemic home sales activity after the remarkable surge over the past two years.”

Yun also commented on the rare market conditions, adding, “The market is quite unusual as sales are coming down, but listed homes are still selling swiftly, and home prices are much higher than a year ago,” said Yun.