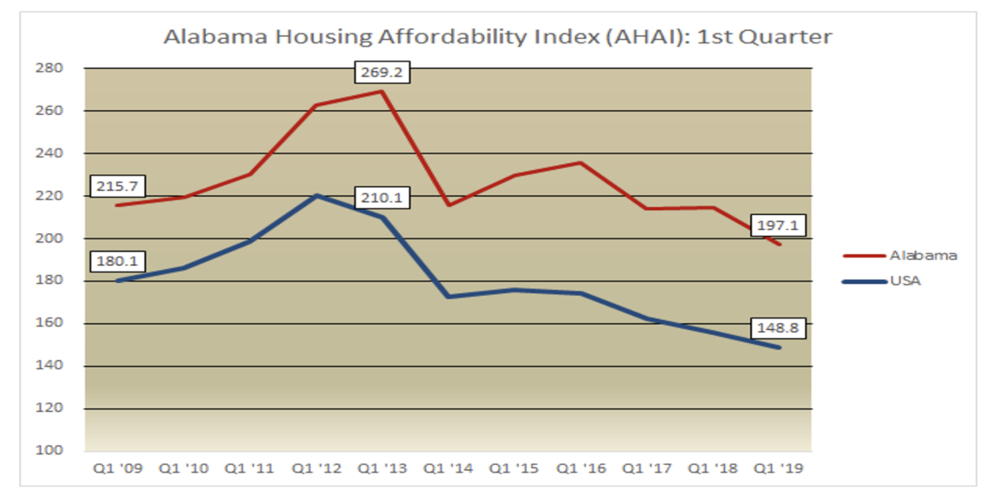 How Affordable is Housing in Alabama?

Real estate markets throughout Alabama had a strong first quarter in 2019. The Alabama Statewide Housing Affordability Index (AHAI) increased 5.27 percent to 197.1, when compared to last quarter’s total of 187.3. Quarter 1 also saw a decrease in both interest rates and median sales price. Composite Monthly Interest rates fell from 4.78 percent to 4.37 percent while median sales price of Alabama homes also decreased to $159,423 when compared to the previous quarter’s total of $159,915. These decreases were also paired with an 8.47 percent year-over-year increase in median family income (MFI).

The 5.27 percent increase in AHAI this quarter means that a family earning Alabama’s median family income of $60,200 has a little more than 1.97 times the required income to qualify for a loan to buy the statewide median-priced home, which was $156,308 this quarter. The National Housing Affordability Index for the first quarter of 2019 was 148.4, 5.94 percent higher than the fourth quarter of 2018.  A family earning the nationwide median family income of $71,900 had a little more than 1.48 times the necessary income to buy the nationwide median-priced home, which was $252,933. Even though the national median family income is 19.4 higher than that of Alabama, Alabama still continues to be more affordable than the nation as a whole due to relatively low housing prices and wage growth in recent years.

The table shows Alabama’s most affordable metropolitan areas. There are 12 of these areas in the state, according to the Center for Business and Economic Research (CBER) at the University of Alabama. Alabama’s metropolitan areas are Anniston-Oxford-Jacksonville, Auburn-Opelika, Birmingham-Hoover, Daphne-Fairhope-Foley, Decatur, Dothan, Florence-Muscle Shoals, Gadsden, Huntsville, Mobile, Montgomery and Tuscaloosa.

The most affordable metro areas in Alabama, ranked by ACRE’s Alabama Housing Affordability Index, are Anniston-Oxford (232.9), Florence-Muscle Shoals (227.4), Mobile (214.4), Montgomery (212.7), Gadsden (211.8). One notably missing fact is that the two most populated metro areas in Alabama, Birmingham-Hoover and Huntsville did not make the top five most affordable metro areas. This can be attributed to a high median sales price, $200,000 in Birmingham and $208,333 in Huntsville, in the first quarter of 2019 which is not uncommon for these areas.

The five most affordable non-metropolitan areas in Alabama are Monroe County (218.4), Marshall County (203.3), Walker County (190.4), Talladega County (182.2) and Cullman County (172.1). Five out of six non-metro areas showed an increase in affordability this quarter.

Notably, the AHAI score for Monroe County decreased 37% when compared to the previous quarter. This is a consequence of the significant increase of medians sales price, $100,383 this quarter and $60,500 in the last quarter of 2018 (a surge of over 65%.

At $52,700, Marshall County has the highest median family income of Alabama’s non-metro areas. This can be explained Marshall County’s proximity to the Huntsville metro area and overall job growth in north Alabama. Huntsville-area real estate, again, is somewhat expensive, so it is not surprising that many people buy houses in nearby areas, such as Marshall County, and commute to Huntsville for work.

The least affordable non-metropolitan area in Alabama is Tallapoosa County, with an AHAI score of 131.2. Quarter-to-quarter data tells us that Auburn-Opelika and Tallapoosa County are the only two areas in the state that are consistently below the national AHAI score. However, Tallapoosa County’s median sales price of $197,500 includes a significant number of expensive waterfront homes on Lake Martin.