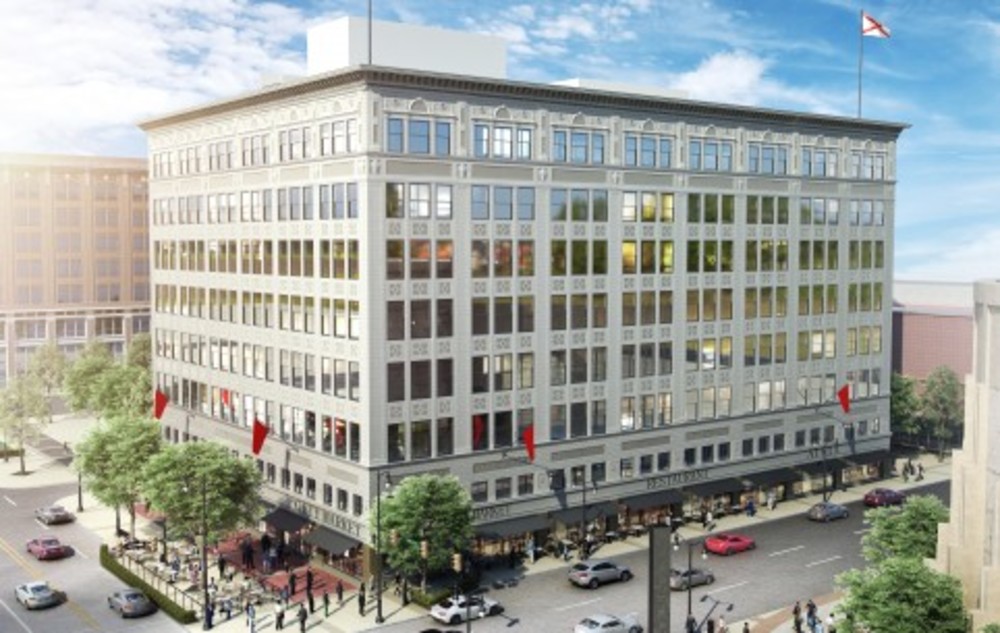 Birmingham-based contractor Brasfield & Gorrie first stepped inside the then abandoned Pizitz building in downtown Birmingham about a decade ago.

Back then, Bayer Properties, which purchased the building several years before, had planned to transform the former department store into an office building. There was even a tenant, Brasfield & Gorrie Vice President/Division Chair Bill Steed said.

“We got to the goal line,” Steed said. “We were getting ready to go.”

The office project was delayed, and the tenant went elsewhere, and then the nation sunk into the worst economic downturn since the Great Depression.

Out of the recession emerged a renewed interest in urban centers and a multifamily boom followed.

The passage of a temporary state Historic Tax Rehabilitation Credit by the Alabama legislature provided the perfect storm that would ressurect, not only the Pizitz project, but also a once-deserted Second Avenue North.

The program ran for three years, dolling out tax credits for numerous high-profile projects, but in 2016, the sun set on the program, and it was not renewed by the legislature.

A recent study conducted by the University of Tennessee on behalf of the Alabama Department of Revenue determined the program was beneficial to the state, receiving an overall B grade in the study.

The legislature is expected to vote on a new bill this session, aimed at renewing and improving the program. Support for the program has grown in Montgomery, as more incentivized projects begin to take shape, not just in Birmingham, but in other areas of the state.

The Alabama Historical Commission oversaw the award of $20 million in tax credits per year from 2013-2015. This includes 39 projects, with a baker’s dozen approved but currently on a waiting list.

“Without a doubt, the historic tax credits accelerate redevelopment and adaptive reuse of structures that may or may not ever get redeveloped or reused if not for the juice of the historic tax credits,” said Merrill Stewart, whose Stewart Perry Construction just completed the Thomas Jefferson Tower (apartments and retail), as well as The Lyric Theatre and the historic Redmont Hotel, all in downtown Birmingham. “I firmly believe this.”

Stewart said that in completing the Thomas Jefferson Tower, around 200 construction jobs were created.

Brasfield & Gorrie’s Steed said between 250 and 300 workers were involved in the rehabilitation of Pizitz.

While these jobs are not permanent, jobs in the Food Hall in the ground floor of Pizitz and the restaurant and event space at the bottom of Thomas Jefferson are.

With the help of the state historic tax credit, The Florentine building, another Second Avenue North project, has become one of Birmingham’s top event spaces.

The multiple successes and popularity of the state historic tax credit in Birmingham could easily create the perception this was a Birmingham bill, but multiple cities around the state are seeing the benefits of the program.

Like Second Avenue North in Birmingham, Montgomery has been able to transform the entirety of Dexter Avenue, according to Stephen McNair of McNair Historic Preservation Inc.

McNair is also a registered lobbyist who is advocating the renewal of the state historic tax credit.

McNair said the Dodge and Buick buildings in downtown Mobile have been rehabbed for modern office use.

“Both of these 1920’s automobile dealerships have been transformed into modern workspaces for engineers, general contractors, and technology companies,” McNair said. “These projects have created a halo effect of development, resulting in at least four other new historic rehab projects on the same street.”

In Tuscaloosa, The First National Bank building on Greensboro Avenue was redeveloped thanks to state historic tax credits.

The initial historic tax credit bill only lasted for three years before it expired. Had it been given more time, McNair said, the impact of the credits not only would have been seen in Alabama’s five major markets, but also in smaller cities in need of an economic boost.

“In the initial five-year period, we found most of the projects were concentrated in large urban centers,” McNair said. “However, smaller communities benefited from historic tax credit projects once the major building stock in the larger cities had been rehabilitated.”

McNair said these findings are based on data from neighboring states like Mississippi and Georgia, which he said have run successful historic tax credit programs.

“We also found that many out-of-state developers gravitated to the smaller communities after completing larger projects in city centers,” McNair said. “This was in part to establishing relationships within the state and the value of buying historic properties in smaller communities. We anticipate the same trend to continue in Alabama if the program is renewed.”

McNair said a new bill could be introduced in Montgomery in a matter of weeks.