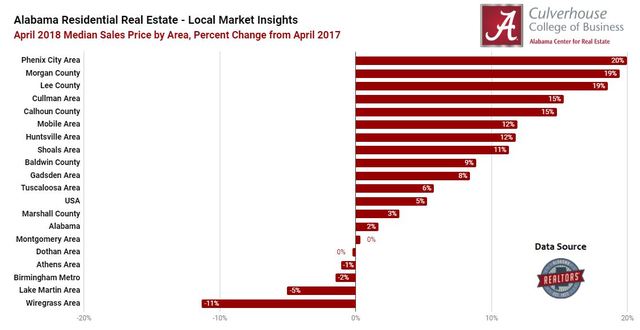 Median price grew statewide during April, but at a slower pace (2 percent) than it did during the first quarter of 2018 when median sales price increased 7 percent. For Alabama’s large metropolitan areas, Mobile and Huntsville (12 percent) showed the largest median price gains. Prices stayed at April 2017 levels in the Montgomery area while median price in the Birmingham area declined 2 percent year-over-year.

Similar to the total sales category, the largest gains in median sales price were also in Alabama’s midsize metropolitan markets. During April the median sales price was $150,000 in Phenix City, $141,500 in Morgan County, and $240,500 in Lee County. 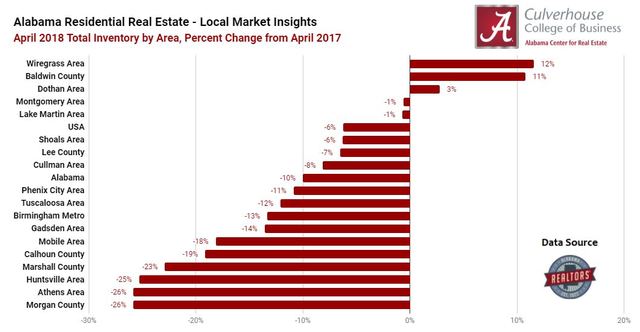 Inventory is trending downwards in both Alabama and the United States. The number of homes listed for sale dropped 10 percent in Alabama during April, while it dropped 6 percent nationwide. The largest declines in inventory were in north Alabama, which is home to two of Alabama’s hottest markets, Athens and Huntsville.

Three of Alabama’s large metropolitan areas saw double-digit drops in inventory from one year ago. Inventory increased, however, in 3 markets, all of which are in the southern region of the state: the Wiregrass area, Baldwin County, and the Dothan area. Inventory gains in Baldwin County, for example, are driven in large part by new construction. New construction sales have almost doubled and inventory has more than tripled in Baldwin County when compared to one year ago.

Homes are selling fast in the Birmingham Metro area, with an average of 52 days on the market during April. In fact, Birmingham was the only Alabama market to beat the national average in this category. Homes are also selling fast in other large metropolitan areas such as Huntsville (61 days) and Mobile (78 days). 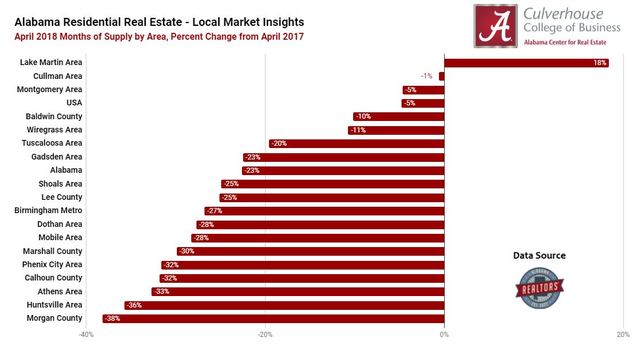 As mentioned earlier, low inventory levels are playing a significant role in driving prices upwards. Additionally, as buyers compete with one another for a relatively small number of homes available for sale, it is easy to see why homes are selling fast and at prices significantly higher than recent years.