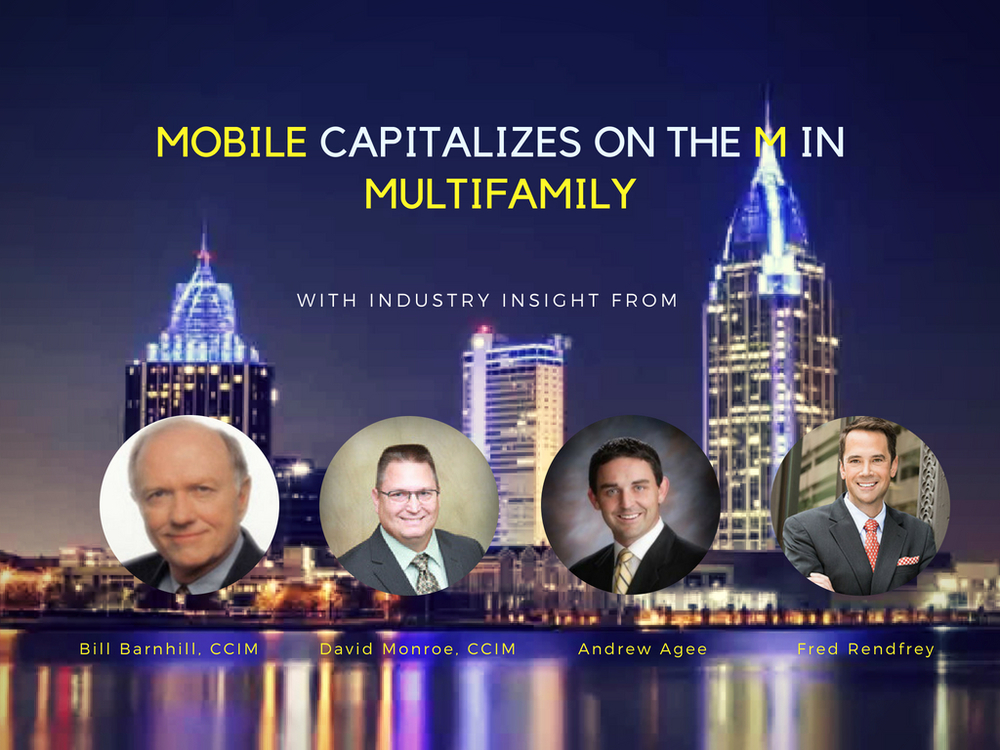 Mobile Capitalizes on the ‘M’ in Multifamily

Fresh air and fresh investments are breathing life into the City of Mobile.

As Mobile turned the page on 2017, the city witnessed one of its most sizeable rental increases. The average rent in Mobile was $830, making it the third highest average rental rate in the state behind Birmingham and Tuscaloosa.

“The announcement of the RESTORE Act and Alabama Gulf Coast Recovery Council’s $315 million investment in Mobile and Baldwin counties is only going to bolster support of further development in the area. The funding will support nearly 50 projects. One of the biggest being a new $28 million facility at the Port of Mobile,” said Barnhill.

“Equally as important are the Three Mile Creek recreational trails that will follow the creek, connecting downtown Mobile to the University of South Alabama,” said Fred Rendfrey, Mobile’s director of downtown development for the Downtown Alliance.

Announcements like those by the RESTORE Act and Alabama Gulf Coast Recovery Council give reason for excitement in the area and provide multifamily investors and developers with the confidence needed to continue pushing in the pipeline.

“There are eight market rate multifamily developments in the Port City’s pipeline,” said Agee. Two out of the eight developments, Meridian at the Port and Highland at Spring Hill are currently under construction, totaling 514 units.

Meridian at the Port is a large and distinctive presence on the east side of Water Street, a location that will make it one of the first landmarks seen by visitors arriving via I-165. Leaf River Development Group’s expect this $51 million, 267-unit downtown multifamily project to be completed in 2019.

While many are hesitant of such a significant investment like Meridian at the Port on a national level, the Southeastern multifamily market continues to progress and invest.

Nationally, many fear the “multifamily bubble” is about to pop; however, the Southeast remains an anomaly. “I would accredit the region’s success and enduring development to the rise of secondary and tertiary markets,” said Agee.

Multifamily investors see stability and foreseeable growth in these markets. Primary markets are highly volatile and are becoming an even greater risk for owners and investors because of their insecurity.

“Secondary and tertiary markets like Chattanooga, Birmingham, Huntsville, and Mobile that are sustained by less volatile industry like healthcare and manufacturing offer greater confidence in a return on investment,” said Agee. Barnhill bolsters Agee’s statement accrediting the city’s industrial and manufacturing businesses as beacons for growth.

“Mobile is not a tech town like Huntsville or Birmingham. The backbone of our economy relies heavily on industrial and manufacturing industries. I believe we will only continue to see that expand,” said Barnhill. He cites the recent Airbus and Bombardier deal as an example. The investment is projected to bring $300 million and 600 new jobs to the Mobile Aeroplex at Brookley Complex,” said Barnhill.

Agee agrees. “The Port of Mobile is the second most active port in the country, providing the area with constant streams of revenue and investment. It also provides a variety of employment from skilled labor to medical professionals, filling up multifamily dwellings across the board,” said Agee.

“Additionally on the submarket level, downtown has seen tremendous growth in office and retail investments. Downtown is capitalizing on being in the middle of the metro area. The new apartments are filling a product void. The multifamily developments will help us truly become a 24/7 downtown and an area for further growth,” said Rendfrey.

As multifamily owners and investors flock to more sustainable markets, Mobile is becoming a market to watch, but not just because of the new downtown developments.

“The value add play is still very strong in our market and as properties hit the market there’s a fight for them. I would caution on any new Class A construction until all the units have absorbed that are currently under construction and in the pipeline,” said Monroe.

“While Mobile’s downtown is in for a bit of a renaissance with Leaf River’s Development, I would argue that we will see the most growth in workforce dwellings based off the port’s labor market and Mobile’s multifamily trends over the past five years,” said Agee.

Monroe echoes Agee’s sentiment. “The demand is in workforce housing and with the cost of land and construction, it’s cost prohibitive to build a Class B project without tax credits. This will further draw from the Class A properties as the Class C value-add investors improve those assets to a B status and the tenants flock to the nicer, yet more affordable units,” said Monroe.