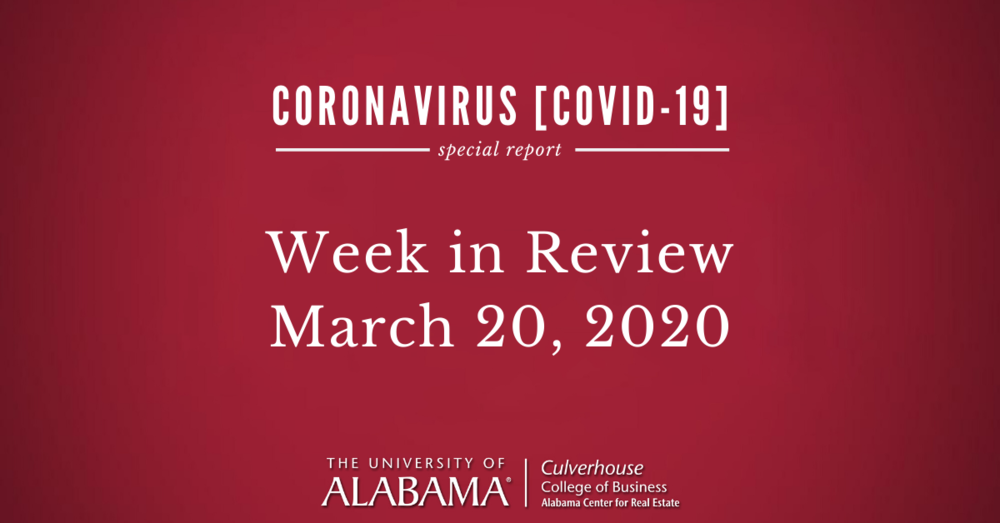 Sometimes a picture is worth a thousand words – like this week’s graphic from YCharts portraying the past 30 days’ decline in the respective Stock Market indices. The Nasdaq is down 29%, the S&P 500 is down 30%, and the Dow is off 34%. And if you added in the Russell 2000, you would see a 40% decline. All this carnage in a mere 30 days effectively wiping out two-three years’ worth of gains. An appropriate tag for this period of the stock market is the “Fast & Furious”. Not during the Oil-Patch collapse 1.0 1985-1990; not in the S&L Crisis of the 1980s; and, not even during the 2009 Financial Crisis have we seen the likes of this type decline or public health crisis. And not since the onset of the Great Depression have we seen this kind of market free fall in such a short period of time. But that “Fast & Furious” stock market portrayal does not begin to provide context as to what happened this week – and why we should continue to Look Up & Forward toward next week. 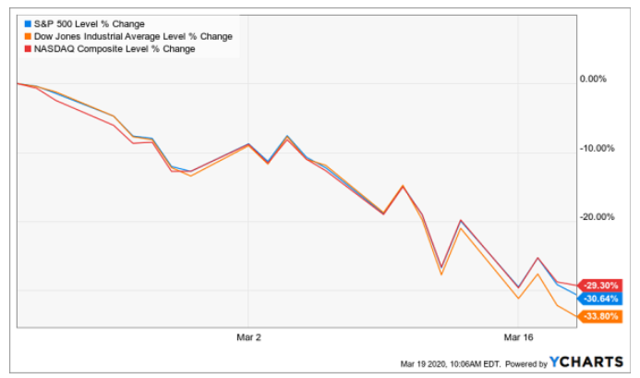 Before “Looking Up & Forward,” there is one more dimension to the decline. The last time the respective markets experienced back-to-back daily increases was the Wednesday-Thursday preceding ACRE’s annual commercial real estate conference (ACREcom) on February 5-6, 2020. Attendees at the conference may remember the slide below. Note what was the Black Swan item that none of us could begin to fathom would play out so destructively over the next 6 weeks? The answer is the coronavirus. 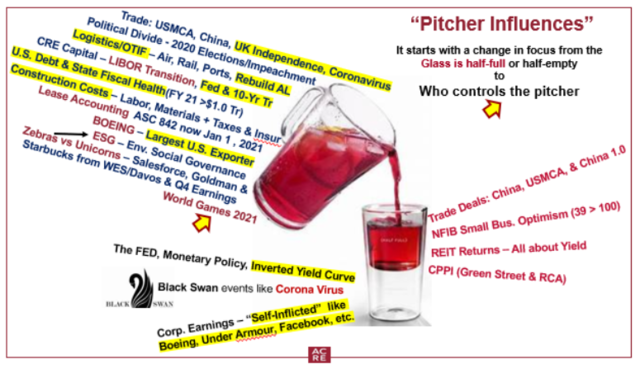 The Week of March 16 in Review:

i) the economic (jobless claims, housing starts and permits, etc.) and earnings (FedEx) data were still rearview-mirror looking and not yet indicative of the real-time economy; and

ii) Congress – along with the Federal Reserve – sparred amongst themselves to decide which legacy stimulus action to throw at the virus.

Although the week ended without two consecutive days of stock market stability, there were a ton of nuggets of insights to note that can help guide us in the week ahead.

Friday morning March 20th started with hope and ended with more angst: the futures market opened with the DOW indicating a +500 point increase. That evaporated by lunchtime as Congress failed to agree on a third rescue, stimulus and stability bill. So the Fed intervened again – but this time with three unprecedented moves in one day.

ii) Then the Fed noticed there was trouble in the municipal bond market and they moved to announce an intervention to support muni-bonds; and

iii) lastly, they began what we previously mocked China for in 2019 during the tariffs and trade war – security or stock purchases. This crisis has deteriorated to the point where the Fed is having to purchase stocks to try and stabilize the economy and banks with loans or investments in companies material to the economy and banking system.

Congress must get a rescue, stimulus and stability bill agreed to over this weekend and passed by early next week – or start asking “What-If” the DOW were to fall to 15,000? The enhanced actions by the Fed today are reminiscent of Bernanke’s term when the Fed engineered TARP, TALF and Bank Stress Tests. These actions show they get low interest rates are not the magic solution; rather, it’s how to keep liquid the small (small businesses), the munis (municipal bond markets) and the forgotten from the 2009 bank bailouts that caused the recovery to be so anemic. Who is that? It’s the municipalities and states that got devastated with unemployment insurance claims, criticized for workforce layoffs of vital services and secondary education, and small businesses.

The big takeaway from this week is that unimaginable stimulus is coming in probably 2-3 waves that is going to target workers first, cities and states second to shore up unemployment insurance, and small businesses to aid with business interruption from home isolation mandates. Then, and only then, corporate America will be aided with loans and grants versus bailouts. Unlike the bank and automaker “Cash for Clunkers” type bailout programs from 2009, Corporate America, like Boeing, are going to get loans but have to pledge or surrender equity in their business. This is going to be a “bottom-up” re-inflating the economy versus trickle-down bailouts that forgot to trickle down after 2009.

Next week and the following week are make-or-break periods that will likely determine whether the U.S. slips into just a recession versus a second Great Depression for three reasons:

First, Congress has to act and pass the rescue, stimulus and stability bill. The market won’t wait, and we will see a Dow at or below 15,000 one week from today if we are still waiting on Congress for stimulus.

Second, within 15 days from March 15th we should know if the social distancing along with home isolation containment strategies are working, and the outbreak curve is flattening.  If not, this economy is going to be shut down beyond March and 1H-April and well into May and the summer.

Third, the next wave of “after-shocks” occur as:

i) auto manufacturers idle plants (Ford, GM, Chrysler/FIAT and Honda all announced closings starting this weekend – and BMW, Volkswagen, Mercedes and Toyota are next in the queue);

ii) the shock to America’s supply chain sinks in with a California state-wide home isolation order idling our two largest container ports in Los Angeles & Long Beach, Calif., that handle more than 25% of our 55 million annual containers and more than half the inbound flow from China; and

iii) final decisions are made by primary and secondary schools as to whether to hold commencement ceremonies and host summer programs on University campuses. If schools cancel all, the small business carnage in university towns will be severe. Recall that “Christmas” for most small businesses in university towns is commencement season. As the universities close for winter break before the holidays, commencement season is where 35%-50% of annual revenue is generated from florists and photographers, caterers and restaurants, and stores.

First, the auto makers announced today they are ready to shift from making cars to things like ventilators. That means idled auto workers could be put to work making medical equipment.

Second, the President re-enacted the Defense Protection Act empowering him to use industry to manufacture what is needed to combat the enemy – this time medical equipment to battle a virus.

Third, on a personal note, with all the recent conference cancellations, an industry group this week was still confident enough to invite me to speak and guarantee my honorarium for their conference in October.

Look for Congress to agree on stimulus legislation this weekend. On Monday, ACRE will feature a ”Look Up & Forward” fresh assessment of the ports and what to expect in port MSAs and supply chain. Here is a teaser. China is back up and manufacturing. Its ports are open. Container ships are loaded and inbound for the U.S. Do they call on a closed port at Los Angeles/Long Beach or sail north into Canadian ports like Port Rupert, or divert through the Panama Canal and come into Houston, Mobile, Ala., or Tampa Fla.?

ACRE will continue to post updates and commentary on the impact of COVID-19 on the WIN, on our media platform exploRE and on our LinkedIn page.

If you have any specific questions or if you have a media inquiry, please email acremedia@culverhouse.ua.edu.

All Posts
PrevPreviousHome is still a good place to be for COVID-19 isolation and investment
NextBirmingham Area Home Sales Increase 4.8% in February 2020Next
X