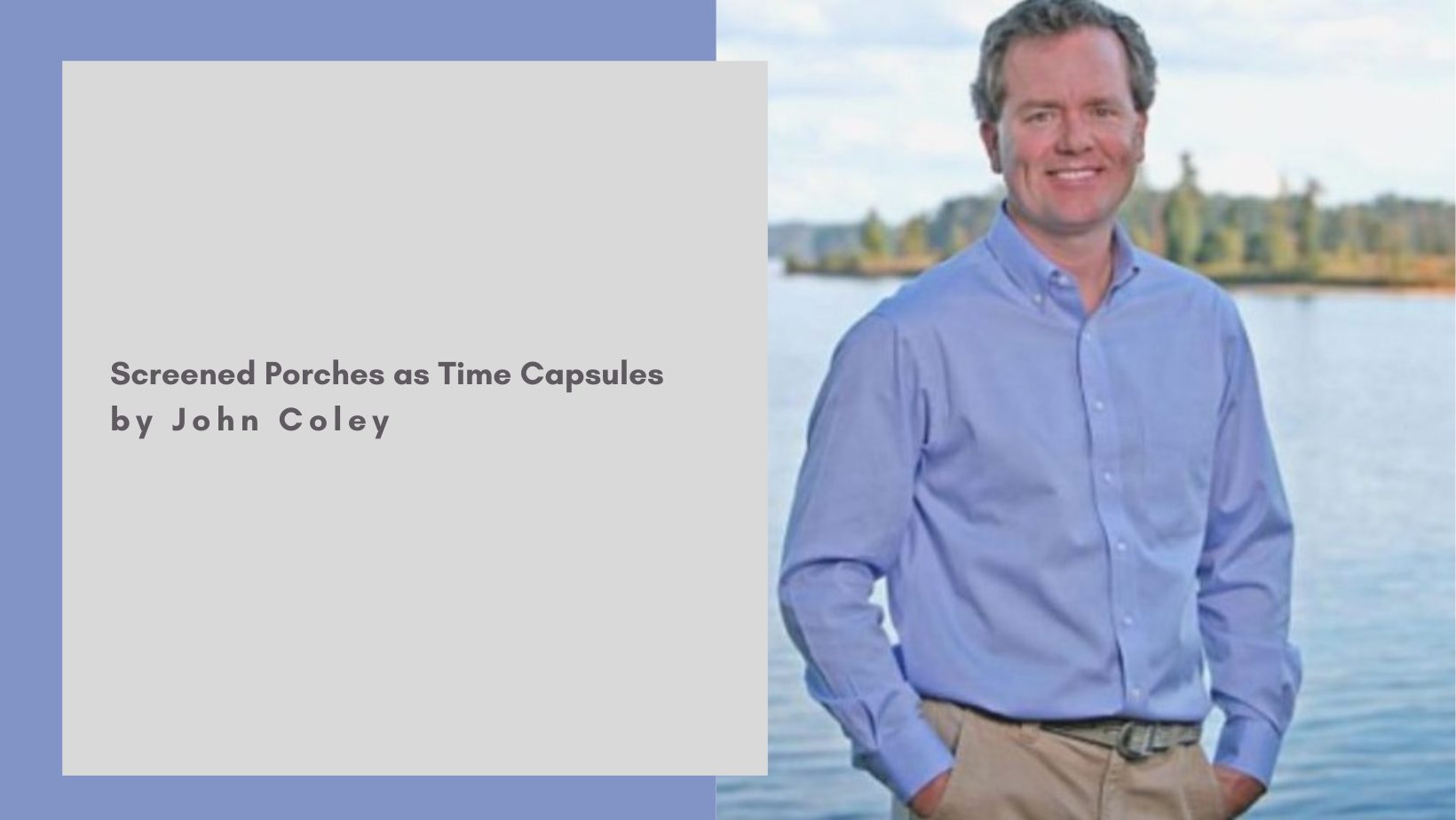 There are lots of people around now that say that America is getting soft, and not in a good way. It’s a criticism. The inference is that if we had to face the huge challenges of prior generations like the Great Depression or  World War II that we would just give up.

Let’s face it, some think America is so soft now that we can’t cope with anything that’s beyond the range of a good Wi-Fi signal. We can’t stream our favorite reality show du jour? Forget about it.

I’m not here to make any pronouncements about our country’s collective toughness or grit. I don’t think there has been any generation in history that thought, “Wow, kids these days are way tougher than we were.”

But, as a real estate agent, I do sometimes wonder about how we live when I notice a difference in homes built even 40 years ago versus those that are built now.

Screened porches, to me, serve as a great reminder of this concept. They stare at us as time capsules. They tell us not only when they were built, but the priorities and concerns of those who built and used them. Since Lake Martin is a vacation home market where many of the first homes were built in the 1950s and 60s, we have a chance to peer back in time as we squint through the screen.

The very first image that comes to my mind is the screened door itself. Is there anyone among us, who, once we have heard the sound of a screen door opening, and registered that telltale creak of that long spring, does not always remember it? Does any other door have such a distinctive sound when it is being opened? And I don’t care what brand of screen door it is and where you are, they all sound the same. Also, you can also tell about the intent and emotion of whoever is opening it because when someone yanks it open it creates a really high squeak and then slams shut. The high squeak and slam means something is either really wrong outside or someone is excited. Does any modern door type also convey that emotion? Is that where we want to be as a nation? With everyone having the same bland silent door openings and closings?

And what about security? Back in the old days, the only lock the screen door offered was this little aluminum hook that went on the inside of the door. All you had to do was wiggle the door open a little bit and put a knife in there or something and just flip the hook up and you could gain entry to the screened porch. Worst case scenario, if you were a criminal or you were truly desperate, you could cut a little slit in the screen and undo the hook that way.

Is that how carelessly we thought about security back then as a country? Is it a parallel to the story old-timers tell of being able to ride their bikes all over the city without fear? Nowadays, screened porches have cameras that are set off by motion and can record audio and video that is 100 times more viewable than that of the moon landing. Are we that much under siege, America? Do we really need the security of Fort Knox just to guard the “Live Laugh Love” painting we bought at Hobby Lobby?

Screened porches used to be mostly for storage. You kept things there that you knew you wanted to pick up on the way to the water. Gas cans. Outboard motors. Those cardboard boxes that came for free when you bought 100 crickets at the bait shop.

There was a downside, of course, to old porches. Unwanted items thrived there like dead, dried-up lizards. Ours had an insecticide from the 1940s that I’m sure contained gene-warping DDT.  It was one of those metal “atomizer “ sprayers. For you youngsters, it was nothing more than a bicycle tire pump attached to a tin can of poison. It was exactly like the one Don Corleone used in his death scene in “The Godfather.”

Not so in this modern era. Our screen porches are oases, but are they testaments to our largess?  Now we have flat-screen TVs. Nice couches that are actually comfortable. $50 candles.

Now is the part of this article where I’m supposed to wrap this all up with a call to return to the simpler days of Andy Griffith and Pat Boone. But I’ll be honest. If you come look at our screen porch these days, you would see that we have a flat-screen, super comfortable sofas, and Wi-Fi that’s thicker than the fireflies of your youth. If someone were nice enough to give me a kegerator to put on our screen porch, trust me – I wouldn’t turn it down. In fact, I’d come pick it up and save them the trip.

So, yeah. I’m guilty. Maybe I’m contributing to the soft edge of America with our cushy screened porch. But I’ll tell you this- it’s our family’s favorite spot to hang out. Isn’t that worth something?

Can’t we embrace the new possibilities of a modern home without laughing at our past? True, the screened porches of yore had a lack of entertainment, but their base deliverable was simply to keep away mosquitos. And yes, today’s screened porch might not need that 11th throw pillow. But isn’t comfort always a laudable goal?

I think we can love old home design and embrace new comforts. But then again maybe I’m wacky on pre-war insecticide and scented candles.