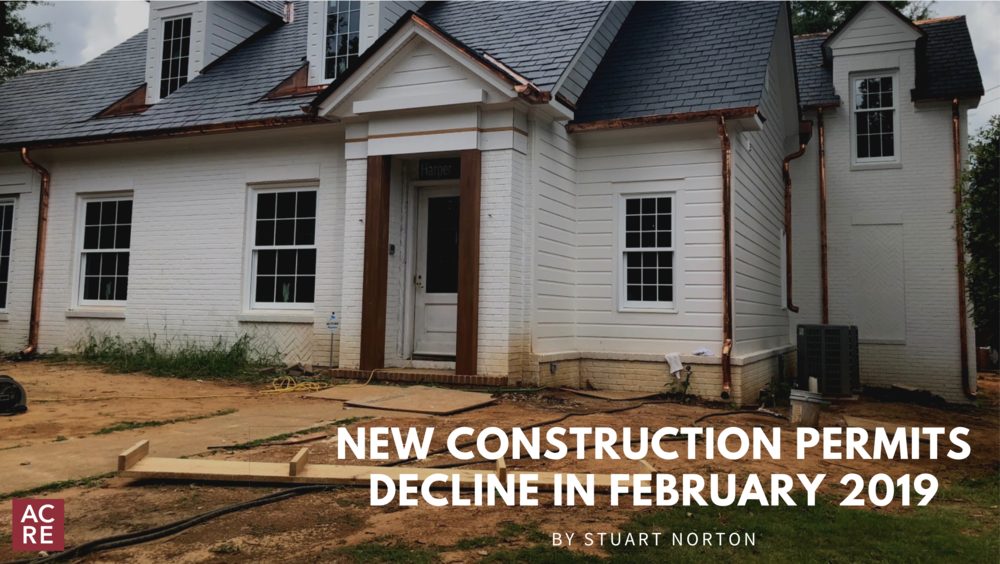 New single family building permits dropped 7.7 percent year-over-year (YOY) nationwide during February. This decline erased January’s significant gain and permits are now down 6.8 percent on the year. A variety of factors including extreme weather, the partial government shutdown, and housing affordability concerns contributed to the drop in February permits.

Extreme weather conditions played a significant role in the permit decline. The Rocky Mountain and Great Plains regions experienced a bomb cyclone, resulting in a combination of extreme weather conditions. Violent thunderstorms, harsh winds, blizzards, and even flooding resulted from the storm cycle. This was after a rough end to 2018 that saw hurricanes and wildfires in other regions of the country. Taken together, it comes as no surprise that extreme weather played a role in the February housing slowdown.

Additionally, the partial government shutdown that lasted from December to January has the potential to negatively impact the data. Permits generally run one full month behind as it is a significant amount of data to collect. The partial shutdown resulted in permits falling even further behind, but the permit data is slowly catching up as furloughed workers are now back on the job. Affordability concerns also played a factor in the declining permits in February. New construction generally sells at a 20 percent premium when compared to equivalent existing homes. Combine that with the continued economic expansion and rising home price appreciation, resulting in many potential buyers being priced out of the new construction market.

New single family building permits also declined in the south region as they were down 3.4 percent YOY in February and down 3.5 percent year-to-date (YTD). However, the economic foundations for strong housing demand are in place. Unemployment in the region is relatively low, and wages are growing faster currently than at any time during the 10-year economic expansion. Additionally, demographic factors such as Millennials over taking Baby Boomers as the country’s largest generation suggest that demand for housing, whether it be new or existing, purchase or rental, will only grow as the south region’s population expands.

Alabama was not immune to the permit slowdowns seen nationally and within the south region. Permits for new single family housing units declined 7.2 percent YoY from 1,069 one year ago to 992 in February. Housing starts, on the other hand, were also down but to a lesser degree declining 0.9 percent in February. The good news, however, is that both permits and starts are well above the 5-year average, suggesting that Alabama’s new construction industry is trending upwards despite the recent declines. The extreme weather seen across the nation was also found in Alabama. Above average rain and extreme cold fronts slowed many construction projects in the state during February. Stay tuned to see if March permits and starts rebound. 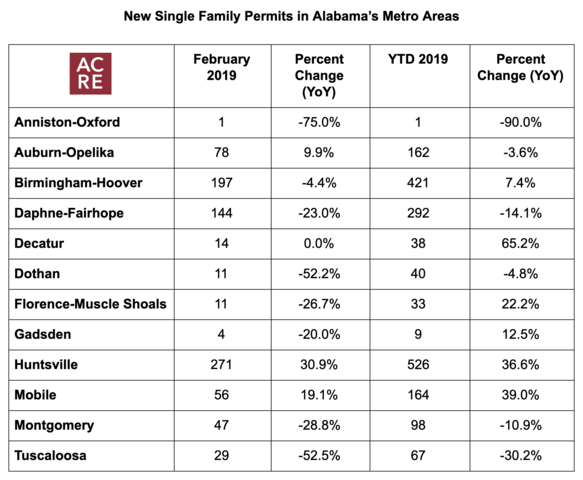 All Posts
PrevPreviousWhat Is the Best Month to Sell a House?
NextAlabama Counties with the Largest Property Tax Payments in 2018Next
X